Engaged and thousands of miles apart

(ABC 6 News) – A woman from Albert Lea has been engaged for two years, but the couple’s lives have been on hold because of the pandemic and borders being closed across the world.

But now, plans are being made to be together again, forever, after the U.S. has confirmed to open its borders to vaccinated travelers from Europe on Nov. 8.

"There’s the very first day we met. That’s the day I judged," Jodi Lundin said. She traveled to Spain to judge a dog show 7 years ago when she met her fiancé, Angel Trimiño Perez.

"The first time we went like 480 some days without being together. Now I’ve got a chalkboard I write every day down. Now we’re at like 123 since I was there last so thank God for FaceTime," Jodi said.

The last time Jodi and Angel saw each other was when she went to Spain in June. Jodi says it gets difficult. 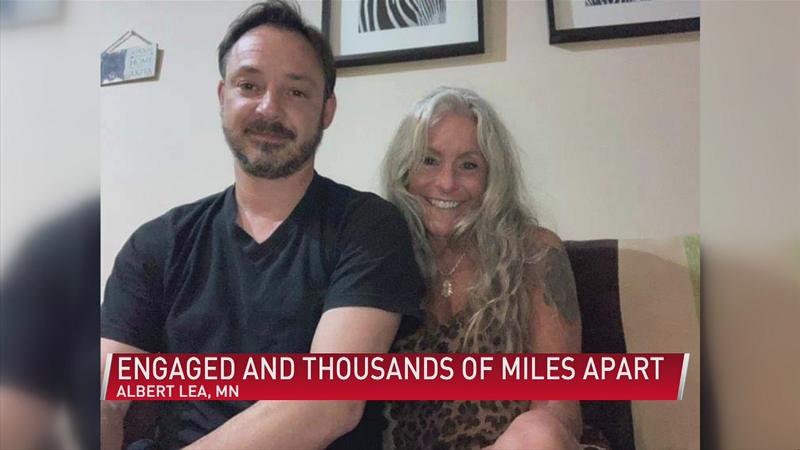 They have been engaged for two years with plans for Angel to move to the U.S.

"And that was two years ago this month. And then COVID hit," Jodi said. Angel is hoping to get here by Nov. 12.

"Our lives have literally been on hold because first of all I mean, there’s a lot he has to do over there before he can even think of coming here," Jodi said. They say it’s been tough with the borders being closed for this long.

"When you can’t be with the person that you love and that you want to share a life (with). So frustrated," Angel said.

Jodi says it’s not just about tourism, it’s families that are being separated. But now the day they’ve both been waiting for is in sight.

And they say the secret to getting through these past couple of years has something to do with how they met.

And setting aside time for some friendly competition.

"We like to play cribbage but we couldn’t figure out a way to do cribbage this way but Yahtzee worked," Jodi said.

Only a few more weeks of virtual goodbyes until they can finally say hello in person.