(ABC 6 News) – Driving by the Rochester airport Thursday morning, you may have seen a plume of smoke and a parade of first responders, but it was only a drill.

Rochester Airport Fire, Mayo Ambulance, Rochester Police and the fire department all came rushing onto the tarmac at the Rochester International Airport Thursday quickly trying to put out the flames and save those inside the plane’s cabin.

It was, of course, a plane crash simulation.

While all of that sounds quite scary, it’s actually a pretty routine exercise for all airports.

"It’s required by the FAA that we do this every three years, and what you saw today was a pretty successful exercise," John Reed, Executive Director of the Rochester International Airport, said. 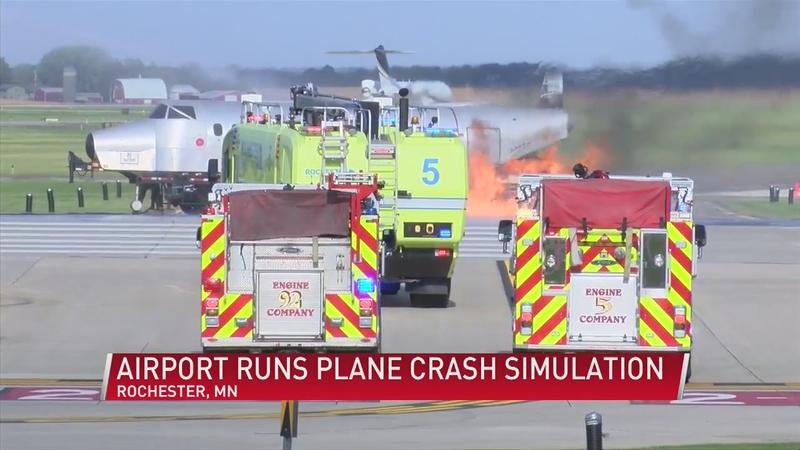 All kinds of emergency services in Rochester come together to test everything from response time to their equipment in case anything like this should ever really happen here.

The teams get the call that a plane has crashed at RST and they respond accordingly.

The fire department puts out the fire while EMS workers attended to the passengers. In this case, the passengers were FedEx employees and mannequins.

"It practices skills that thankfully aren’t needed every day, but still we have to practice," Rochester Fire Chief Eric Kerska said.

Kerska said the first team to arrive is the most important.

"The first arriving unit has to take charge. ‘Take command’ we call it and they start calling the plays just like a sports event," Kerska said.

He said every time they run this drill, they learn something new.

"We focused on the cabin of the aircraft rather than the debris field, so that was a learning point," Kerska said.

Agency leaders said this was an overall successful simulation.

"It’s agood opportunity to work with other departments for something we hope we never have to do," Reed said.