(ABC 6 News) — For much of the season, the Chatfield Gophers have been one of the top softball teams in Minnesota.

They were tested in the Section 1AA tournament. Outlasting Cotter 1-0, beating longtime rival St. Charles 5-3 before dropping the first of what would be three games against Cannon Falls.

After losing to Cannon Falls 4-2 on May 31, the Gophers knew they had to be perfect if they wanted to make it to the state tournament, and they were.

The Gophers shut out Zumbrota-Mazeppa 6-0 in the elimination bracket, setting up a rematch with Cannon Falls Thursday in the section championship. 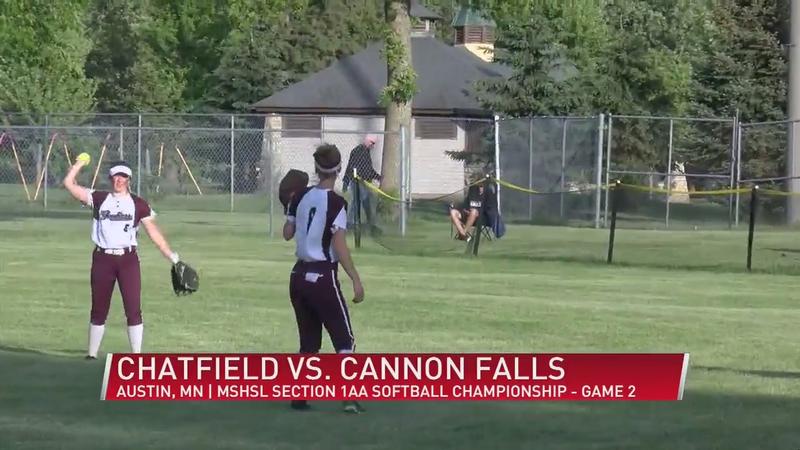 "I think we all just wanted this so bad and we’ve wanted it since last year when we lost in sub-sectionals," senior Sydney Allen said. "We just kind of made a pact together that we were going to work hard over the summer and in the fall and in the winter to make it to this spot. So yeah, we worked hard and we were thinking this is what we want and this is what we’re going to do"

Next stop for Chatfield: Caswell Park, North Mankato where the Gophers will make their first state appearance since 2009.

For Kasson-Mantorville, their season came to an end at the hands of another top softball team: The Winona Winhawks.

K-M pitcher Libby Maxson pitched a stellar game, allowing five hits and all four runs she allowed were unearned. Winona jumped out to an early 2-0 lead in the bottom of the first and never looked back.

The KoMets had all three of their hits in the fourth inning when they scored their lone run, on an RBI double by sophomore Calleigh Richards.

After that, the Winona defense stifled them on their way to a 4-1 victory and their second straight Section 1AAA championship.

Despite the loss, the KoMets were happy with how the season went.

"It went really well," senior Libby Maxson said. "Everybody connected really well even from the start. It was really good."

"It was an awesome season," Catiera Thome said "I don’t think I could have asked for a better senior season. It was… we had a great team. I mean leading up to it, I feel like we’ve always had a really strong program and I felt super good about the season."