"I was hoping to have friends and other artists come and spend some time and blow some glass. It’s kind of a dream lost," glass artisan Peter Waldman said.

A fire took his livelihood and his studio. Waldman said rebuilding has been lonely so far.

Waldman lived studied glass blowing in New York. He moved to Austin in 2019 to take care of his parents. His favorite part about glass blowing is the nuance of the material. 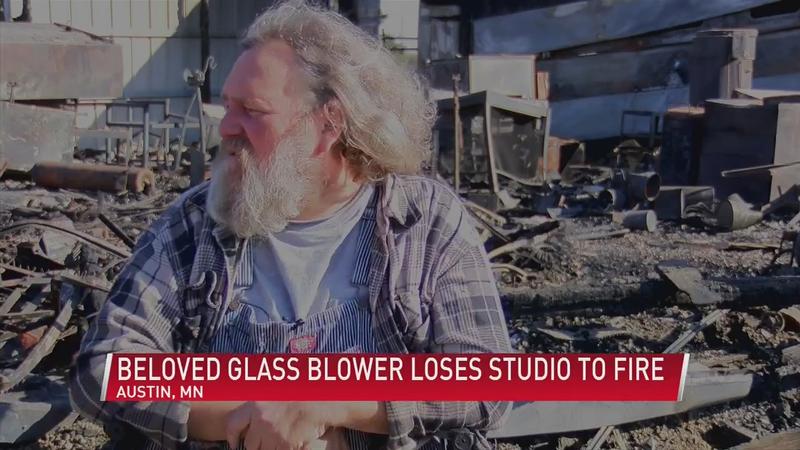 "It’s clear and opaque and it’s rigid and hard and delicate all at the same time. It’s a very mysterious material and a lot of that is here in the ashes somewhere," Waldman said.

He hasn’t started to pick through the ashes yet, but he knows it will be a big job. The cause of the fire is still a mystery. His customers think he was born to blow glass.

"This is his life and he’s so good at it," customer Denniece Trimble said.

His work is also a vital part of Austin’s artistic community. Hundreds of concerned residents have flooded Waldman’s Facebook since the fire. They are offering their support during the devastation. Waldman’s GoFundMe is almost at $5,000 after just three days.

Waldman already has a plan for recovery. He plans on building a mobile unit to get back on the road and get back to blowing glass.

"The mobile studio will be fun because I can get outreach and get around in the communities. I’d love to have some students down here and more interest," Waldman said.

He’s looking for an apprentice to teach and to help rebuild. Waldman says he’s thankful to the community and to his customers for their help in picking up the pieces. Waldman’s work is still on sale at the Austin Artworks Museum, and he says as soon as he gets access to a studio again he’ll be making more.