(ABC 6 News) – A bald eagle nest was torn down at the old Meadow Lakes golf club on Friday. Nearby residents were used to walking out of their homes and catching a pair of these iconic birds in a tree nearby. Contractors with the housing developer ML Group I LLC tore down the tree and burned the nest before a big snow storm.

"It was destroyed fast. It was destroyed, I think, violently and it’s absolutely irreversible. So this nest — whatever the DNR says — is gone for good," said Leal Segura, a- member of the local conservation group Save the Rookery.

While residents are upset and scared that the birds won’t have a safe home with the nest gone, the United States Fish and Wildlife Service said in a statement to ABC 6 News that bald eagles are tenacious animals. The pair living in Rochester have an alternate nest nearby. Bald eagles haven’t been endangered since 2007. This particular nest wasn’t considered actively in-use by the Minnesota Department of Natural Resources because there were no eggs or baby eagles present.

"It was important for both agencies to issue the permits and have them valid now before the birds actually laid any eggs or had chicks," said Lori Naumann, an information officer for the Nongame Wildlife Program in the DNR.

Community members believe eagles may have a higher population in other parts of Minnesota, but said they are rare in Rochester. 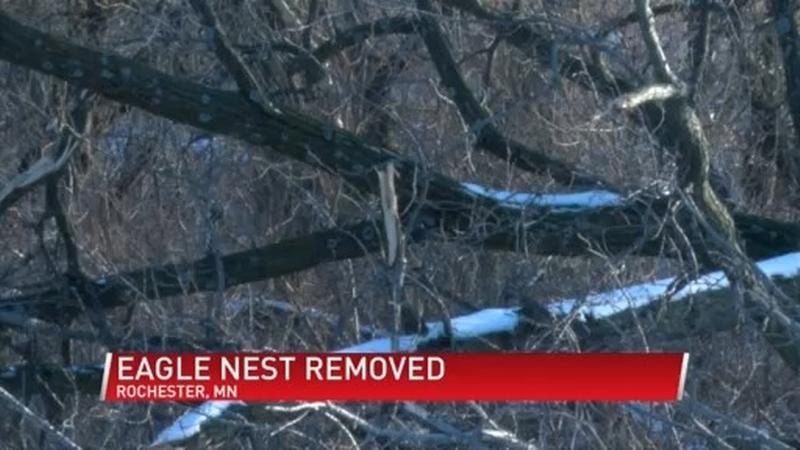 "I was born here. I grew up here. We did not see bald eagles when I was growing up. If we did it would exceptionally rare," Segura said.

"In the northern part of the state, they’re so used to seeing bald eagles up there that they’re like crows or robins in their yards," Naumann said.

Save the Rookery, a local conservation group focused on the Blue Heron, released a statement saying the public was blindsided by the removal and that we need smarter development plans to protect our wildlife and natural areas. The U.S. Fish and Wildlife Service says that ML Group I LLC is creating a wetland restoration area that will benefit bald eagles in the future. However, the developer hasn’t released any specifics on those plans.