The revised schedule will go into effect for the 2022-2023 bell schedule. For some schools, the times won’t be changing by much.

Part of the reason for the change is to help the busing schedule. Because of long rides and various start and end times, it ended up creating a bigger challenge.

The board used a bell study to help make their decision. What they found is by changing bell times, that can help shorten the ride time, reduce traffic in school areas, and minimize the amount of time students spend at school before the actual school day actually starts and ends.

The board also voted unanimously to allow two school board members to join the district as substitute teachers. Making no more than $8,000 per fiscal year. 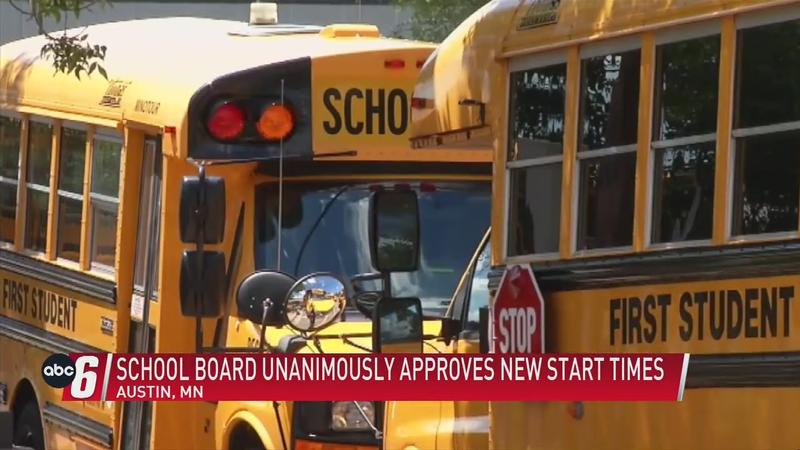 "With the pandemic, and all of the absences and teachers and staff, it really puts the pressure on teachers because when there aren’t substitutes… then teachers have to substitute," said Don Leathers, an Austin School Board member and one of the two members taking on the role of substitute teaching this fall.

"In reality, you’re losing your prep hour, and so the number of teachers who have been absent…it’s really been a large number and it’s a continuous thing. So I’m just doing it to take a little pressure off the teaching staff at Austin Public Schools."

The board voted unanimously to approve the new start times.

The board also voted unanimously to allow two school board members, Cece Kroc and Don Leathers, to join APS as substitute teachers making no more than $8,000 per fiscal year.

This is a developing story. Stay with ABC 6 News online and on-air for the latest.