(ABC 6 NEWS) – Many people in America are wondering what to do as the threats against Ukraine continue. Locally, one Austin couple has friends and family in Ukraine trying to decide whether or not to flee.

Esther and Valera Zdebko met in Ukraine and got married in 2017.

In 2019, they moved to Minnesota, where Esther is from and now, they said they cannot believe this is happening to a country they consider home.

"Valera was born it was then the Soviet Union, then it was Ukraine, and we met in 2016 when we were doing a camp at an orphanage," Esther Zdebko said.

They lived in Ukraine on and off from 2011 to 2019. They were there when Crimea was invaded by Russia back in 2014, a smaller but similar situation to the recent invasion. 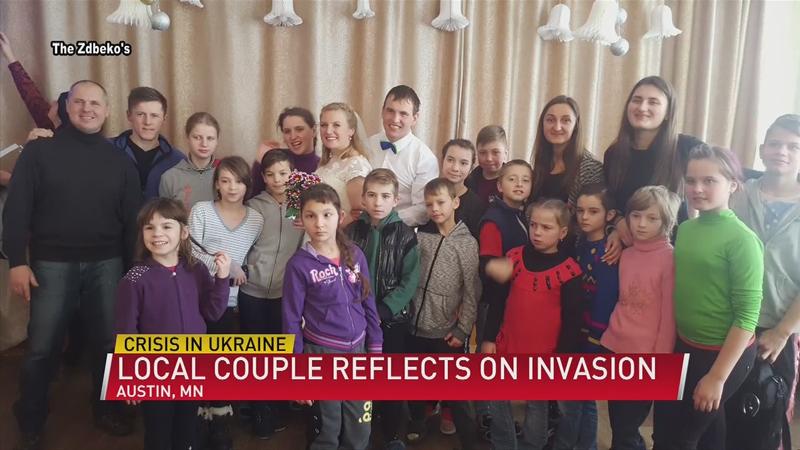 "It was really easy there was no big deal Russia just took Ukraine, I think that they were hoping that Russia would just be happy and not take any more land," Esther said.

But this time around, they are across the world, living in Austin with their two boys, Benjamin and Louis.

"It’s better for the kids to at least have the first part of their lives here cause it is a little easier," Esther said.

When sirens rang out across Ukraine and bombs were heard in the distance, Esther and Valera made sure to stay in touch with their families and friend over there.

"Sister e and uncle and nephew Valera has two sisters that he is in contact with and then a niece and a nephew and then we have a lot of friends and our church family," Valera and Esther said.

They said from what people have told them, you didn’t have to be close to the border to be attacked during the early morning hours in Ukraine.

"So many people we have been talking to are saying well we are leaving this city to go somewhere but nobody really knows where to go," Esther said.

Valera said if you have money and a car you can try to leave, but for his sisters, they’re having to stay home in their small village near Kyiv.

"Right now his sisters are asking us to send money before all the banks are closed or something because if anything does happen they don’t have a car or they don’t have enough money to get to the border probably and live in Poland or I don’t know what would happen," Esther said.

Valera said while he is sad, he hopes world leaders intervene instead of just talking about what is happening.

"I feel sad, but it is different for us than the people actually living there We can be upset but they are actually worried for their own lives," Valera and Esther said.

Moving forward, they are going to continue to closely monitor how their friends and family are doing in Ukraine, send prayers, and try to help in any way they can.

They said for people in America, they want them to think about those in Ukraine, their faces, names, and lives.

They asked people to stay informed and send prayers to the people of Ukraine.