(ABC 6 News) – The 9th grade Byron boys outscored Zumbrota-Mazeppa in their last home basketball game Wednesday night. But the final score of the game didn’t matter after what happened in the last ten minutes of the game.

When freshman Bode Brown was just six weeks old he had a heart transplant that limited him from participating in sports. But that and his love for football and basketball hasn’t stopped him.

Coach Evan Morris had this night planned out for weeks to give Bode a jersey and get him in the game to score in their last game at home.

"Just because he has unique circumstances that don’t allow him to play sports, doesn’t mean he still can’t be a part of the team, the program and the community," Morris said.

Morris and the boys had to keep it a secret until Wednesday night. 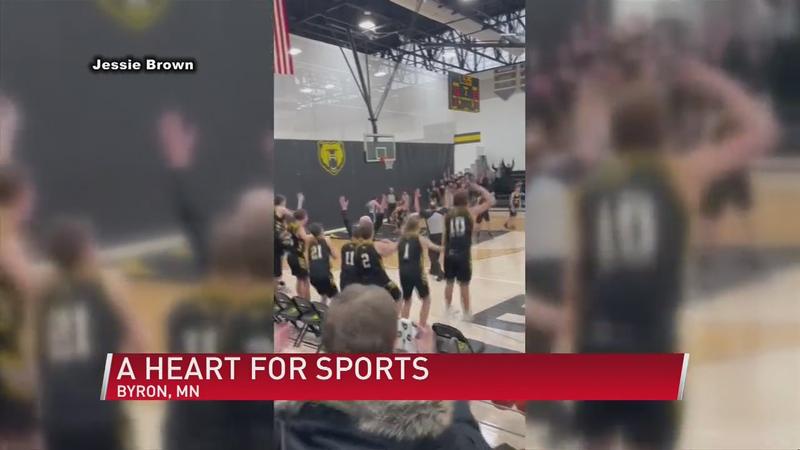 With less than ten minutes left on the clock, Bode got on the court and played defense for a possession and then got to shoot for three, scoring a total of five points in the game.

"I kind of missed a lot of shots though," Bode said.

But after those few missed shots and lots of encouragement from not only his teammates, he made the free throw.

"Oh my gosh. I can’t explain the emotion that went through me," freshman teammate, Jackson Ende, said.

There was lots of support from the boys and coaches of Zumbrota-Mazeppa too.

"Zumbrota-Mazeppa able to let him get a bucket in there was really nice of them," Ende said.

And of course the fans.

"It was kind of like how you would draw it up," Coach Morris said.

"I got goosebumps it was crazy. I could feel the bleachers rumbling behind me from everyone just clapping and it was so fun," Ende said.

But Bode won’t take all of the credit for that last win at home.

"Not just me. Other people on the team too," he said.

Coach Morris said he hopes to have this happen again in the future and Bode has hopes for the rest of his high school basketball career.

"If I practice enough then I can actually start," he said.

Bode’s teammates said he’s not only a great supporter at games but every day at practice too.

"He’s been there every game supporting us, it was nice to be there to support him too," Ende said.

The Byron boys freshman team has one game left in Lake City on Thursday.