Three people have been charged with helping the person who fired shots at Mall of America last week.

Denesh Raghubir, 21; Selena Raghubir, 23; and Delyanie Kwen-Shawn Arnold, 23, are all charged with aiding an offender.

Officers responded to reports of multiple gunshots on the west side of Mall of America at around 4:17 p.m. Thursday. Officers were then directed to the Nike store, where three cartridge casings were found just inside the main entrance.

Surveillance video showed six people had been involved in a fight in front of the store’s checkout area, causing several customers to run away. Two people involved in the fight — identified in a criminal complaint as 21-year-old Shamar Alon Lark and 23-year-old Rashad Jamal May — left the store briefly and then returned. Upon returning, Lark allegedly fired a handgun several times toward others involved in the fight.

Security footage showed the two then ran out of the mall’s north doors, through the north lot and into the Ikea parking lot. Officers then determined they were picked up by a Best Western hotel shuttle and taken to the hotel just south of the mall. 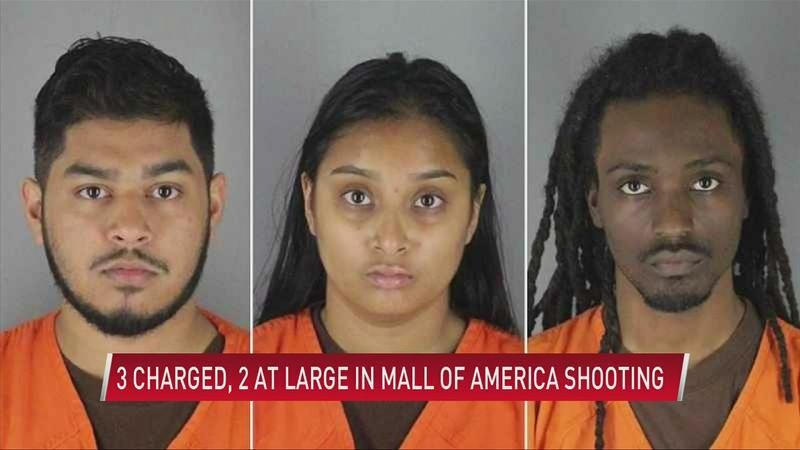 According to the complaint, phone records showed that May called Arnold two minutes after the shots were fired in the mall. May then got five calls from Arnold between 4:20 p.m. and 4:23 p.m.

Arnold’s girlfriend is Selena Raghubir, an assistant manager at the Best Western and the cousin of Denesh Raghubir, who was identified as the driver of the shuttle that picked up May and Lark.

The complaint states that hotel management confirmed Denesh Raghubir isn’t the regular shuttle driver and the regular driver was working at that time but he allegedly told officers he dropped Lark and May off at the hotel and knew them as friends of his cousin, Selena.

Denesh Raghubir also told officers that Selena Raghubir left the hotel immediately after he dropped Lark and May off and he didn’t see her for 45 minutes, the complaint states.

Officers searched Arnold’s and Selena Raghubir’s home and vehicle the next day and found the orange shirt apparently worn by May and the white tank top worn by Lark at the time of the shooting.

As of Monday afternoon, Denesh and Selena Raghubir and Arnold were all in custody. If convicted, they could face up to three years in prison and a $5,000 fine.

Lark and May remain at large.

Bloomington police are scheduled to provide an update on their investigation at 3 p.m. Monday.