(ABC 6 News):UPDATE: A 26-year-old Rochester man was arrested in Lyle after an armed robbery in Austin.

Adrick Mims was taken into custody a little before 6:30 p.m., after he was found hiding in some bushes.

According to Austin Police, at approximately 1:50 p.m. an off-duty officer was driving by Ankeny’s on 12 St. SW when he observed a dark sedan parked behind a neighboring business. 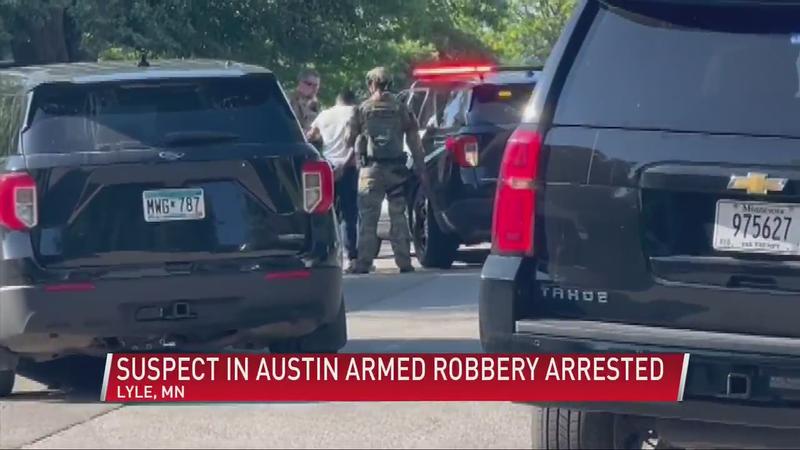 While the off-duty officer called in the information, the gas station attendant also called in to report being robbed at knife point.

Mims then fled from the scene at an extremely high rate of speed. A short pursuit ensued but was terminated in the interest of public safety.

Officers later located his vehicle and pursued from I-90 onto 218 south toward Lyle.

As Mims headed into Lyle, he abandoned the car and fled on foot. Law enforcement from Austin, Mower County Sheriff’s Department, Mitchell County Sheriff’s Office, Lyle Police and Minnesota State Patrol responded and set up a perimeter in the area of Second Street and Nelson Avenue.

The Austin/Mower Special Incident Response Team was sent in to clear homes and search for Mims.

Mims was found hiding in some bushes near one of those homes.

"I had no idea he was there. I looked around the house, I saw the squad car come through between our houses looking for him, and then I walked around the house twice… I didn’t see anything. And then we were standing in the kitchen and all the came cops barreling through our yard so we ran out front and he was in there," said Ben Wolcott.

Mims is currently being held at the Mower County Jail and is facing a 1st-degree aggravated robbery charge. Mims also had some existing warrants for his arrest.

The Mower County Attorney’s Office will make any final charging determinations upon their review of the case.

Responding law enforcement told ABC 6 News that they pursued a suspect in an Austin armed robbery to the Lyle area.

Sheriff’s deputies and local police have surrounded an area, and believe the suspect is inside a Lyle residence.

At 5:50 p.m, officials in Mitchell County, Iowa sent an alert to residents to "be on the lookout for a black male, white T-shirt. white shoes last seen near Lyle. Call 911 if seen, do not approach him. May be armed."

Earlier Friday afternoon, authorities sent out multiple alerts and social media posts advising people in the area to "please watch for a black male, white t-shirt, white shoes and a beard. If seen please do not approach and call 911."

The Lyle Fire department also posted an alert on social media warning residents to lock their doors and stay inside, and avoid the north end of town.

This is a developing story, stay with ABC 6 News on-line and on-air for the latest.

Police have surrounded an area in Lyle where they believe a suspect is hiding. I’ll be live at 5 with more on @ABC6NEWS pic.twitter.com/QlQbwcC8H4