(ABC 6 News) – Kokou Christopher Fiafonou, 38, was shot by officer Zachary Gast, a two-year veteran of the Austin Police Department in the parking lot of a Kwik Trip last Thursday night. Gast has been placed on standard administrative leave. The shooting followed a 24-hour standoff between police and Fiafonou at an Austin home, where police believed he was having a mental health crisis.

Now, the Austin community is coming together for Fiafonou’s family and friends.

"Do you understand what I’m saying? He was a father! He was a father and friend, a lover, a neighbor. He didn’t bother anybody. That was my fiancé, that was the father of my daughter. His only child! She doesn’t have him anymore. I need justice," Christopher’s Fiancé said.

This emotion carried through the demonstration.

"We are here for values, we value humanity," demonstrator Raj Setchu said. 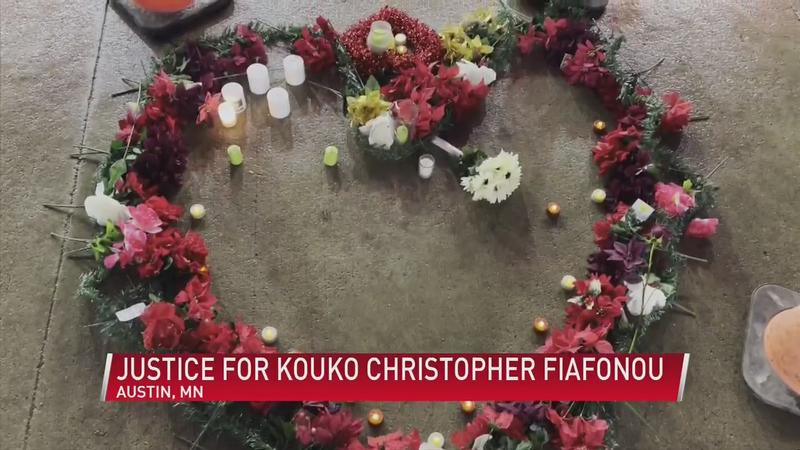 "Racism combined with the fact that people aren’t cared for who have mental illness leads to violence which is unnecessary," April Luehmann said.

For Christopher’s family, all they want is answers.

"They destroyed our family because they took somebody from us that we love. Materialism isn’t important to us right now, what’s important to us is justice," family member Antranette Smith said.

And for people in Austin, the news of Christopher’s passing still hurts.

"It’s heartbreaking when you hear something like this, it’s systemic and it hurt my heart," Austin resident, Lars Johnson said.

"I’m proud to be standing with this family. This was a family that was rendered instantly homeless in addition to having to grieve the loss of their loved one, no family should go through what they’ve gone through," demonstrator Michelle Gross said.

People spent the day marching down the street. Holding signs like "Justice for Christopher" and "arrest Zachary Gast."

Protesters at one point were even redirecting traffic as people were traveling through downtown.

They’re asking for video footage of the incident to be released to the family, for the cops involved to be fired and prosecuted, and for Christopher’s family to be compensated for their losses.

"What they did, in this case, was inexcusable," Gross said.

At one point during the demonstration, they marched to the police station and went through the front doors, where they turned around.

Soon after, a community prayer followed, where Christopher’s family was in the middle of the circle.

Austin Police Chief David McKichan tells ABC 6 NEWS "Our agency recognizes a citizen’s free speech rights, in terms of protest activity, even when that protest is directed at us. We appreciated that the participants at today’s event were able to share their message in a peaceful manner."

And as Christopher’s family moves forward, there’s a sign of healing.

At the Kwik Trip where he was killed, there lies a memorial in the shape of a heart.

During the demonstration, we did not see any law enforcement officers patrolling the streets, the protests remained peaceful.