A season ago Albert Lea’s hopes of a section title were dashed by Rochester Lourdes in a close 3-2 defeat.

But this season, the young Tigers girls hockey team took out Austin to make school history.

"it’s just – it’s so insane. It’s something I’ve been dreaming about since I was really little. You know, growing up in southern Minnesota playing hockey. I knew it was going to be a dream that we’d have to work hard for. And the fact that we made is just so crazy it almost doesn’t feel real to me," said Lucy Stay, Tigers forward.

"I think just realizing in the last few games of the season that, ‘hey, this — we’re nearing the end.’ I think it just really kicked them to the next gear and they decided, ‘you know what? It’s one and done, and we got to keep going," said Tigers assistant head coach Laura Wangen. 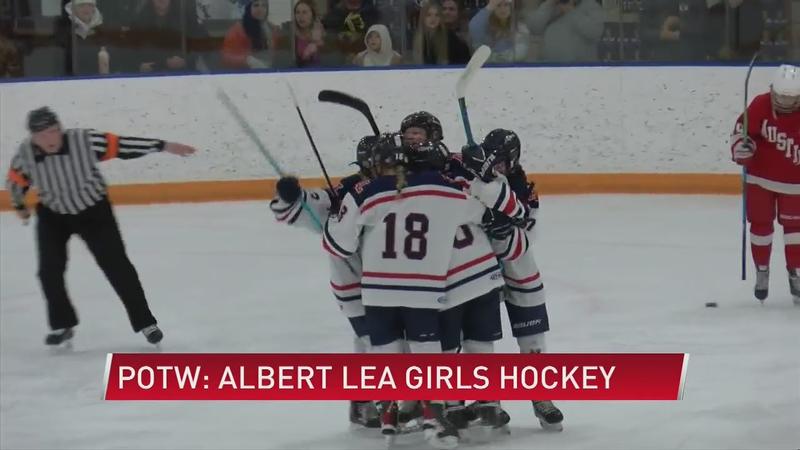 This unit features only three seniors, the large majority made of sophomores, freshmen, and middle schoolers leading scorer Morgan Goskeson who is still in seventh grade.

Yet, despite little upperclassmen’s experience, the Tigers reached their first state tournament. The standard is now permanently raised as has optimism for the future.

"It just feels like a dream. And even though — you know, it just makes leaving a little easier. Because now I can leave knowing that, like — the ultimate goal that I’ve always had has been accomplished and I’m just so proud of that. And I’m so proud of this team and I’m just so thankful for this opportunity and no matter what happens tomorrow, I can leave this program saying that we did something pretty great, so," Stay said.

The Tigers’ young squad finished 14-10-1 this season, and despite an early exit to this year’s state tournament, the season was still a major success.

Tigers will now face Mankato East in the consolation bracket Thursday at 10 a.m. at TRIA Rink.