Mirage junior Nya Sieger would strike first off after a rebound, notching her 18th goal on the season, 1-0. Proctor-Hermantown added another with just under 5 minutes left in the first, freshman Jane Eckstrom found the back of the net off a rebound in front of the net, 2-0.

The Tigers would get their first shots on goal off a late 1st-period power play, the Mirage would outshoot the Tigers in the first period, 17 to 4.

A costly penalty early in the second period would lead to another goal, Mirage’s Izy Fairchild punched in a goal in the back of the net after a shot by Jane Eckstrom. Seconds later, off the face-off a loose puck finds sophomore Hannah Graves’s stick, she nets the backhand shot, 4-0 Mirage. Sophomore goalie Rachel Doppelhammer finished with 26 saves on the day. 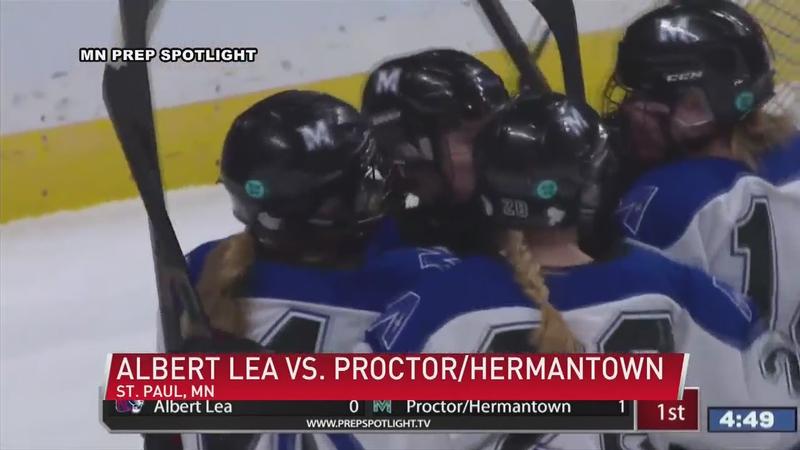 Tigers would switch up the netminders, freshmanJayda Moyer took over in net mid-second period, she found success early knocking down several big shots, Moyer would make 21 saves total in relief.

Freshman Liley Stevens got the Tigers its first-ever state tournament goal in school history off a rebound out front, the assist went to Lillian Hernandez, 5-1. Under 4 minutes left in the second, Nya Sieger snuck a shorthanded goal in the net for her second goal extending the Mirage lead to 5-1.

Late in the 3rd period, off a quick pass from the face-off- 6 taps in another goal for the Mirage. Twelve seconds later senior Esther Yoon struck back with an unassisted backhand goal of her own, 6-2.

The young Albert Lea Tiger squad couldn’t muster enough to make a comeback as the Mirage win 6 to 2. Mirage outshoot the Tigers 53 to 13. Tigers will now face Mankato East in the consolation bracket Thursday at 10 a.m. at TRIA Rink.

Proctor-Hermantown moves on face the Orono Friday at 11 a.m.