Rochester NAACP on the death of Amir Locke: "Here we are again"

(ABC 6 NEWS) – The NAACP is speaking out about the death of 22-year-old Amir Locke, who was shot and killed by a Minneapolis Police SWAT team Wednesday morning.

Police body camera footage shows officers entering the apartment, yelling, and one officer kicking the couch Locke appears to be sleeping on. Locke emerges from a blanket holding a gun.

Then Officer Mark Hanneman fires three shots, hitting and killing Locke. Further investigation into the shooting has determined Locke was not listed on that search warrant, he owned that gun legally, and that his finger was not on the trigger, and the barrel was pointed down when he was shot.

While the MPD’s original press release called Locke a suspect in the investigation, they’ve since backtracked and said Locke was not named in the search warrant. The Rochester branch of the NAACP said discrepancies like this can build distrust in the community. For many, there are still a lot of unanswered questions. 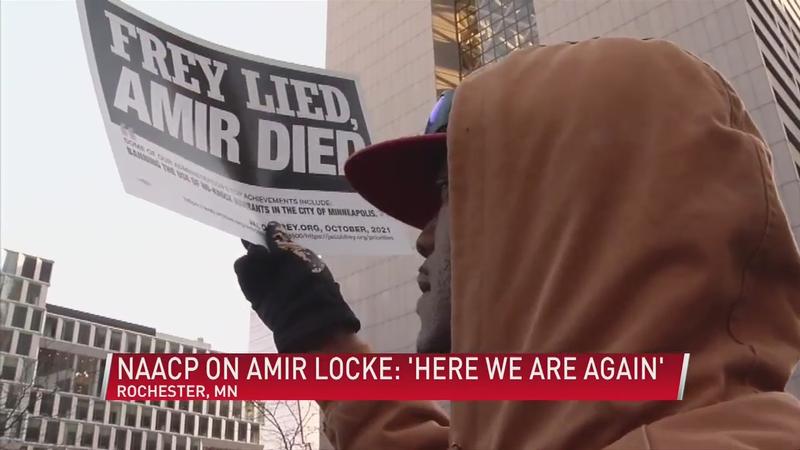 "I want the police officer that murdered my son to be prosecuted and fired," said Karen Wells, Locke’s mother in a press conference.

"Our hearts go out to the family, but prayers alone is not going to fix this," said Walé Elegbede, the president of the Rochester branch of the NAACP.

He said that a lack of systemic, legislative change contributed to the death of Amir Locke. The organization put a call out to elected officials and asks them to pass the George Floyd Justice in Policing Act making it’s way through the federal government.

Many are also calling for "no-knock" warrants to be abolished in Minnesota. Some believe they’re inherently dangerous, and may cause someone to act in self-defense — fearing a home invasion.

Minneapolis Mayor Jacob Frey announced a moratorium on no-knock warrants in Minneapolis on Friday. Only an imminent threat of harm will permit a no-knock warrant while the controversial tactic is under review. Interim MPD Chief Amelia Huffman said that the officers involved in the raid that resulted in the shooting death of Locke had a split second to determine whether or not to take action.

"The involved officer was just outside the frame, in the direction that the barrel is emerging from the blanket," Huffman said of the body camera footage.

"How do we ensure that things like that don’t happen in Rochester? We need to be proactive. And we need to work collaboratively together, and not make excuses that it may not happen here," Elegbede said.

The Rochester branch of the NAACP will hold a virtual memorial for passed activists and for those who have lost their lives to violence – including Amir Locke. The event will take place on February 19th. More information here.