Prep of the Week: Sophie Langsdale

(ABC 6 News) — If you watch a Century Panther girls lacrosse game, there’s definitely one thing you can expect: Sophie Langsdale scoring a goal.

The junior midfielder has scored more than 45 goals — putting her in the top ten of lacrosse players in the state.

"I thought it was really cool," Langsdale said to ABC 6 Sports Reporter Richard Denson. "I didn’t think I was going to be one of the top scorers in the state, I didn’t really have a set goal. It’s more like a game per game kind of situation where I was kinda like maybe I want to get a hat trick per game and that’s kinda what I’m going for."

And while Sophie does score in bunches, she does all the other little things as well.

"She does not get a break," Panthers lacrosse coach Tyler Johnson said. "She’s third in the team in forced turnovers as well so she’s good on the defensive end. She takes the draw for us so she starts every game and after every goal so she puts in a lot of work." 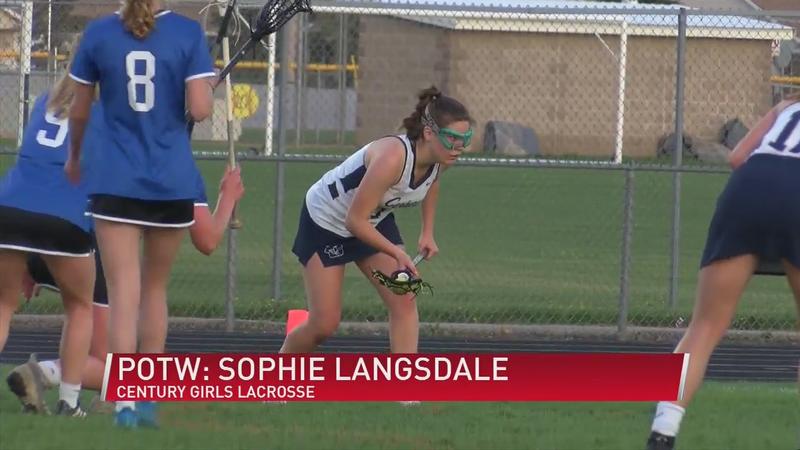 The Panthers have scored 10 goals or more in at least seven games this season making them one of the highest-scoring teams in the state. Langsdale says its an identity they wanted to establish from the get-go, especially after falling to Lakeville South in the section semifinals last season.

"We were kinda frustrated last year with how we ended up, especially with all the girls being kinda new last year," Langsdale mused. "It was a really exciting season and we didn’t realize we’d get that far and this year was kinda like a ‘we need to get that far.’"

Langsdale relishes the game of lacrosse and not only hopes to get another crack at her peers from the Twin Cities but keep the season going as long as she can.