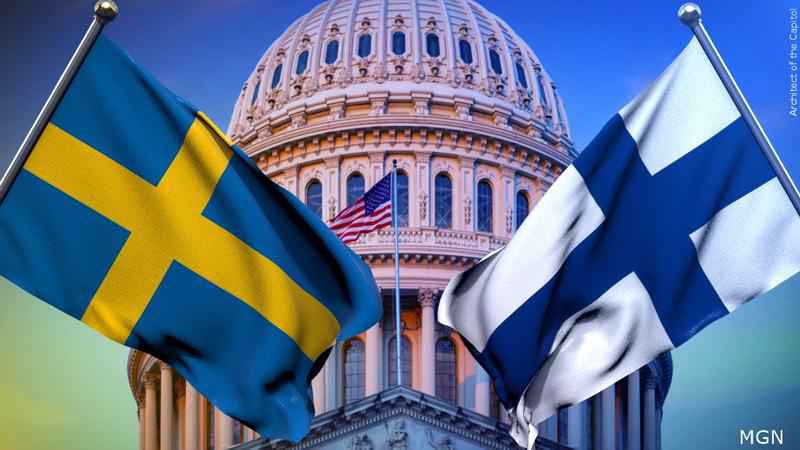 [MGN | Architect of the Capitol]

(ABC 6 News) – U.S. Senators delivered overwhelming bipartisan approval to NATO membership for Finland and Sweden on Wednesday, a crucial step in the quest of the two countries to join the 30-member alliance.

Finland and Sweden announced their decision to formally join NATO within days of each other in May, ending long-held positions of neutrality in the wake of the Russian invasion of Ukraine. They simultaneously submitted their applications on May 18.

U.S. Senator Amy Klobuchar (D-MN) released a statement after the Senate voted to ratify the two countries into NATO by saying, “Finland and Sweden’s decision to join NATO is a testament to the continued strength of this great alliance. Our nation, and my state of Minnesota in particular, shares a special bond with Finland and Sweden, guided by our common values of human rights, democracy and freedom. Both countries are already among our closest partners on a range of critical issues, from deepening defense cooperation in the Baltic Sea to supporting the brave people of Ukraine against the inhuman barbarism of Vladimir Putin. The two nations’ commitment to peace and stability and their defense capabilities will boost NATO’s ability to tackle pressing geopolitical challenges, particularly in the increasingly important Arctic region.

“Finland and Sweden becoming NATO members will not only bolster our collective security, but also strengthen the cause of freedom in Europe and across the world. By ratifying their accession into NATO with overwhelming bipartisan support, we are making it clear that our commitment to this vital transatlantic alliance is steadfast.”

President Joe Biden, who has been the principal player rallying global economic and material support for Ukraine, has sought quick entry for the two previously non-militarily aligned northern European nations.

"This historic vote sends an important signal of the sustained, bipartisan U.S. commitment to NATO, and to ensuring our Alliance is prepared to meet the challenges of today and tomorrow," Biden said in a statement Wednesday evening. "I look forward to signing the accession protocols and welcoming Sweden and Finland, two strong democracies with highly capable militaries, into the greatest defensive alliance in history," the president added.

Meanwhile, during Wednesday’s vote, Senate Minority Leader Mitch McConnell (R-KY), took a veiled swipe at Sen. Rand Paul (who voted "present") and Sen. Josh Hawley (who voted no) in a floor speech, saying, "Their accession will make NATO stronger and America more secure. If any senator is looking for a defensible excuse to vote no, I wish them good luck."