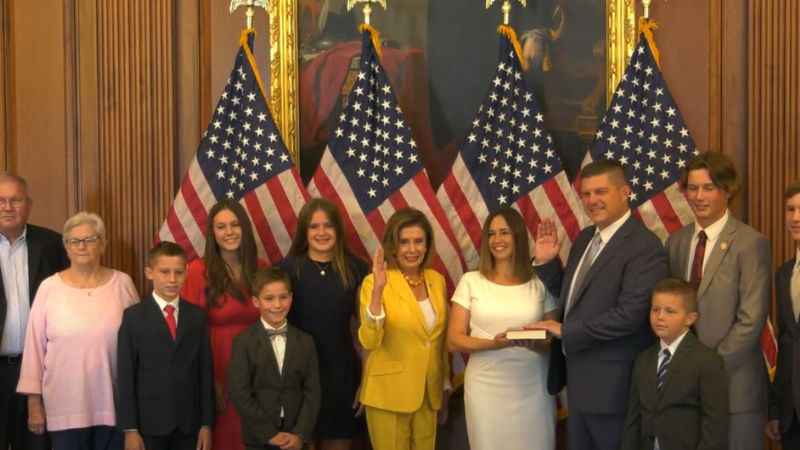 At his swearing-in ceremony, Finstad had his wife, seven kids and parents there supporting him.

Finstad was sworn in after winning a special election in Minnesota’s 1st Congressional District. He will finish out the term of the late Rep. Jim Hagedorn, who died in February.

Finstad will hold that seat until Jan. 3 when the current term is up, meaning he will be on the ballot again during November’s general election.

Finstad also won the Republican primary in the race for the seat’s full two-year term and will face Democratic challenger Jeff Ettinger in November’s general election.

Finstad is a family farmer and fourth-generation resident of the New Ulm area, who formerly served as President Trump’s State Director for USDA Rural Development in Minnesota.

"It is an extraordinary honor to have been chosen by my fellow Minnesotans to serve in this Congress. Minnesota’s First Congressional District has been home to several generations of my family, and I believe it’s the greatest place on Earth. Having the opportunity to bring our values to Washington, D.C. is an important job, and I am committed to working hard for the people of our district every day.

"Let us take time to remember my predecessor, the late Congressman Hagedorn. He was a man of honor and worked hard for the people of the first district.

"I’d like to thank my wonderful wife Jackie, our seven children, and all of my family, for their steadfast love and support. I could not do this without them.

"People in my district sent a farmer to Congress. As a farmer, we wake up in the morning and don’t wonder if something will be broken during the day; we know something will be, so instead, we wonder how we will fix it. I will come to work every day in Congress with the intention to do everything I can to fix things. We inherited the best country on earth from the last generation. We have an obligation to make sure the greatest country on earth is what we are passing to the next generation."