Prep of the Week: Owen Petersohn

(ABC 6 News) – Owen Petersohn went out as a Triton Cobra in style, achieving history for his school’s track and field team by being their first individual state champion. It’s the culmination of an ambitious final season that makes Owen our ABC 6 Prep Athlete of the Week.

Owen Petersohn had dealt with many close shaves before during track meets. Sometimes, he got the short end of the stick. But at the State Track & Field Championships, he gave the crowd and his Dad two finishes to remember.

"Right when I finished the 110, the first race, I saw my name come up first and I heard a big cheering from the crowd and heard him yelling my name, I look up there, point at him… He always wanted me to do this. And I felt like it was a perfect time to do it,” said Owen.

Petersohn won the 110m hurdles during June 10th’s Class A Finals in St. Michael clocking in at 15.23 seconds 0.02 seconds faster than the runner-up. The senior also nabbed the 300m hurdles at 39.27, the runner-up was a third of a second behind.

"My assistant coach and I were just sitting next to each other watching the scoreboard. It’s amazing how quickly the results come out really… So, we didn’t have to wait too long. But yeah, as the race was finishing, it was a very tense moment waiting for the — for those final results,” said Triton Track and Field Coach Kim Swanson. 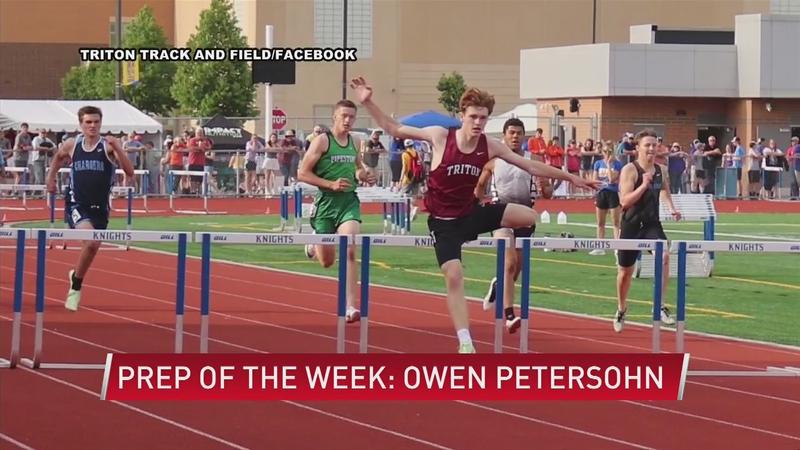 In becoming a two-time State champion Petersohn has also become Triton’s first individual track State champ as well. The standard is now raised for all Cobras.

“It’s a big achievement of mine because I’ve always wanted to be a state champion and set a mark for Triton. Just do something no one else has ever done, so it feels good,” said Petersohn.

The slate will begin anew as he starts at Minnesota State-Mankato, but his legacy at Triton is now set in stone and very well may propel another Cobra to break his mark one day.

Looking back, it was clear what Petersohn’s threshold was this season. At no point this spring did Petersohn lose a Section 1A 110m or 300m hurdle race riding that streak to a historic ending in his high school career.