Prep of the Week: Joe Sperry

(ABC 6 News) — It was back on April 4 when it was cold and baseball games were being canceled and postponed left and right.

Lourdes baseball went forward with their game against Kasson-Mantorville and senior pitcher Joe Sperry started the season with a bang for the Eagles. The senior struck out the first six batters he faced on his way to 10 strikeouts as they beat the KoMets 8 to 1.

"It’s been a fun season playing with these guys," Sperry said. "Probably the most fun I’ve ever had in my life."

Those who know Sperry well knew that game wasn’t an outlier and he was just getting started. Throughout the season, Sperry has been a magician on the mound racking up more than 70 strikeouts and giving up less than 10 runs.

"Just having that attack mindset," Sperry continued. "Just knowing that I’m going to blow by this guy is really important. I’m ready to go the distance whenever but if not I trust my teammates." 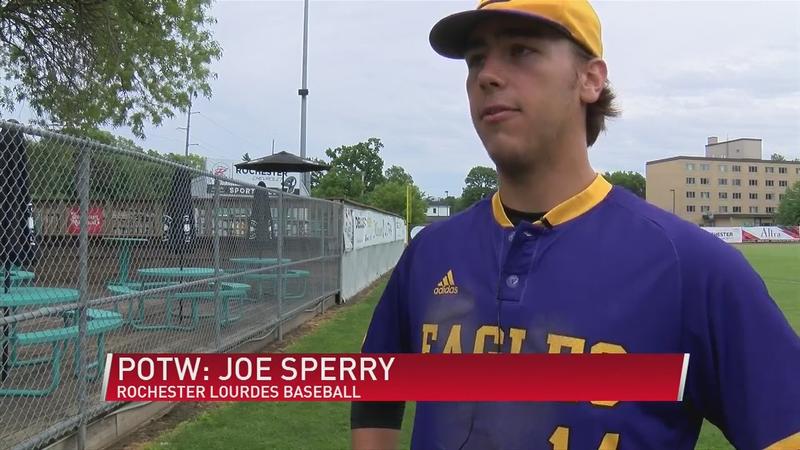 "He’s such a tremendously positive leader as a senior captain," head coach Dave Jenson agreed. "He helps every player get better so with this season there’s really no ceiling to what he can do and he’s proved that every single day. He’s a guy that the other team is going to circle his name in the lineup and say don’t let this guy beat you and he’s batting over .500 with six home runs."

Sperry was named HVL Conference Player of the Year and made the All-Section 1AA Team, attributing his success to the work he puts off the diamond.

"It’s really helped me be at my best no matter what," Sperry discussed. "You know, eating well, getting enough sleep, and drinking enough water so I’m huge on that stuff."

The senior may go down as one of the most productive baseball players in school history; and as he relishes his final go-round with the Eagles, he gives the ultimate thanks to his teammates.

"I’ve been playing ball with them for a long time," Sperry stated. "We see them every day. We hang out outside of baseball, outside of school, so they’ve been a lot of fun to be around. They’re competitive, we’re brothers, we are brothers. We’re a family."

"He’s a special person," Coach Jenson noted. "He’s a tremendously hard worker and he loves baseball. When you have those three I mean it’s hard not to root for a kid no matter what team he plays for if they’re like that."