No. 3 Michigan vs No. 2 Ohio St the Big Ten clash of titans

By MITCH STACY The Associated Press

COLUMBUS, Ohio (AP) — The stakes could hardly be higher for this year’s edition of The Game.

While a scenario may exist that the loser of Saturday’s game could still backdoor its way into College Football Playoff, the more likely result is a consolation bowl game and 365 days of pain.

“When you lose this game, it’s a tough year,” said Ohio State coach Ryan Day, whose team had to swallow a 42-27 beating by the Wolverines in 2021. “There’s no hiding from that.”

Both teams come into the game unbeaten for the first time since 2006. This will be the 13th time since 1942 they’ll clash as top-5 teams in the AP Top 25. Arguably, it’s the biggest game in the series since 2016, when second-ranked Ohio State beat third-ranked Michigan 30-27 in double overtime. 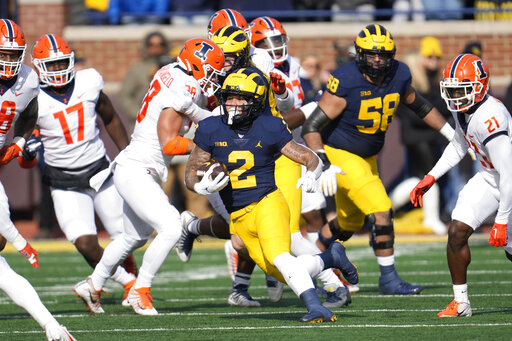 Michigan running back Blake Corum (2) runs the ball against Illinois in the first half of an NCAA college football game in Ann Arbor, Mich., Saturday, Nov. 19, 2022. (AP Photo/Paul Sancya)

“It’s like two superheroes going at each other,” Michigan coach Jim Harbaugh said.

Ohio State quarterback C.J. Stroud and Michigan running back Blake Corum are Heisman Trophy candidates whose teams expect them to take charge on Saturday. It could be Stroud’s last chance to beat the Wolverines; he is eligible for the NFL draft in the spring.

For Ohio State, there is the revenge factor. The Buckeyes were No. 2 last season when they were humiliated in Ann Arbor. That loss snapped a streak of eight straight wins in the rivalry game, denied the Buckeyes a Big Ten championship for the first time in five years and killed their hopes of getting to the CFP.

“It motivated us all offseason, so we’ve worked very hard to get to this moment right here,” Day said this week. “And now it’s time to go prepare the best we can, and that’s what we’re going to focus on physically, mentally and emotionally, to go play the hardest game we’ve ever played.”

Harbaugh last year earned his first victory in the series in six tries. He’s every bit as confident this time. He called his players “happy warriors on a happy mission.”

“I think you’re going to find we’re made of the right stuff,” he said.

Corum, who was injured last week, said his left knee is fine and he expects to play. The Wolverines are also hoping his backup, Donovan Edwards, as well as tight end Luke Schoonmaker and defensive end Mike Morris will play after missing last week’s game with undisclosed injuries.

“We’re not spending any time investigating whether (Corum is) playing or not,” Ohio State defensive coordinator Jim Knowles said. “Just assuming he’s going to play. He’s an exceptional back.”

Ohio State’s star running backs TreVeyon Henderson and Miyan Williams have battled various injuries all season. Henderson had to leave last week’s game against Maryland and finished it on the sideline wearing a walking boot. Williams didn’t even dress for the game. Their status for Saturday is unknown.

A pleasant surprise for the Buckeyes has been the emergence of true freshman Dallan Hayden, who turned in his second 100-yard rushing game in a row. Hayden carried 27 times for 146 yards and three touchdowns in the Buckeyes’ 43-30 win over the Terps.

IT’S BEEN A WHILE

The Wolverines have not played at Ohio Stadium since 2018.

“Most of the players on this team haven’t been there, obviously last time was COVID and we weren’t able to go,” left tackle Ryan Hayes said. “I’ve heard stories. I’m expecting a loud, crazy environment. We’ve played in those games before. I think we’ll be prepared.”

LEBRON ON THEIR SIDE

Ohio native LeBron James said he wanted to make sure the Buckeyes had stylish footwear for the big game, so he provided specially designed Nike cleats stamped with his logo.