Column: Why CFP expansion can’t work around the Rose Bowl 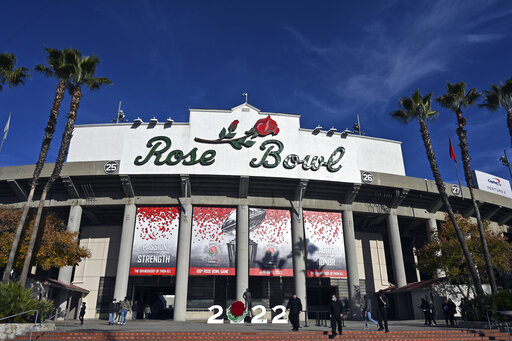 The exterior of the stadium is seen before the Rose Bowl NCAA college football game between Utah and Ohio State Saturday, Jan. 1, 2022, in Pasadena, Calif. Flipping the current college football playoff from four-teams to a 12-teams for the final two years of the current television contract will give those in charge of the postseason a look at how it works before committing to anything long term. But, The Granddaddy of Them All wants the CFP management committee to assure game organizers that their game will continue to be played annually on New Year's Day. (AP Photo/John McCoy, File)[ASSOCIATED PRESS/John McCoy]

When considering College Football Playoff expansion, think of implementing a new format for the 2024 and ’25 seasons as a chance for a test drive.

Flipping the current four-team playoff to 12 teams for the final two years of the current television contract will give those in charge of the postseason a look at how it works before committing to any part long term.

The number of teams and games is unlikely to change, but nothing about the how, when and where starting in 2026 is a lock. There is a chance the calendar for the entire college football season could be different by then.

That’s why the Rose Bowl’s request for future guarantees has created the latest — and maybe the last — hurdle before expansion.

The Granddaddy of Them All that dates to 1902 wants assurances from the CFP management committee that the game will continue to be played on New Year’s Day, kicking off about 90 minutes after the Tournament of Roses Parade ends and about two and a half hours before the sun sets on the San Gabriel Mountains. 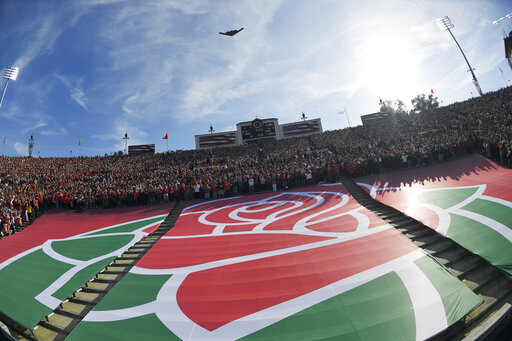 The Rose Bowl logo is seen during a fly over before the Rose Bowl NCAA college football game between Utah and Ohio State Saturday, Jan. 1, 2022, in Pasadena, Calif. Flipping the current college football playoff from four-teams to a 12-teams for the final two years of the current television contract will give those in charge of the postseason a look at how it works before committing to anything long term. But, The Granddaddy of Them All wants the CFP management committee to assure game organizers that their game will continue to be played annually on New Year's Day. (AP Photo/Mark J. Terrill, File)

If the CFP doesn’t accommodate, the Rose Bowl could stick with its current contract and make it impossible to expand early.

“The Rose Bowl Game continues to be open to the possibility of early expansion of the existing playoff. While we have requested specific contract assurances in our initial discussions with the College Football Playoff, we continue to remain open to these discussions,” game organizers said in a statement. “We have no intention of being the lone roadblock that would keep expansion from happening before the end of its current cycle.”

For most of the conference commissioners on the management committee trying to get early expansion across the goal line after more than a year of detours and delays, this is not a topic they are prepared to tackle.

The Rose Bowl only has so much leverage. Beyond 2025, there are no agreements in place for the playoff and conceivably it could be left out all together. Working in the Rose Bowl’s favor is its longtime, lucrative partnership with the Big Ten and Pac-12.

“We have been in conversation with all the New Year’s six bowl games, as they will be a part of the process if we are going to expand early,” Hancock said. “We prefer to continue the existing semifinals rotation in 2024 and 2025, and to play those eight quarterfinals in bowl games.”

The 12-team CFP model calls for four first-round games to be played at campus sites in mid-December. The quarters would be played in bowls already scheduled on and around Jan 1. of the ‘24 and ’25 seasons.

There are already calls for more playoff games on campus from athletic directors who see the chance to boost season-ticket sales by dangling access to playoff games.

Hancock and management committee members have concerns about playoff games on campus. Not every college town has a massive stadium like Michigan’s Big House or The Swamp in Florida along with infrastructure to accommodate a big event on short notice.

“It’s hard to imagine a world they have never seen before,” Stricklin said. “The first first-round playoff games (on campus) will change the narrative. I think there’s going to be a lot of schools pushing for as many campus playoff game as possible once they see them.”

In 2024 and 2025, the Rose Bowl is not scheduled to host a semifinal. In theory, this made it easier to flip the format for those years. The Rose Bowl would keep its highly valued time slot and host quarterfinals. Pushing back the semifinals and championship games for each of those years has been deemed doable.

But after the 2025 season, those dates don’t mean anything.

There is discussion at both the CFP and NCAA level about starting the season a week earlier. Turning Week Zero, the week before Labor Day weekend, into Week 1 would mean playing conference championship games on Thanksgiving weekend.

The playoff could start a week or two after that, and the quarterfinals (on campus or in bowl games) the following week. After a Christmas break, the semifinals — not the quarterfinals — would be played on New Year’s Day, similar to the way it is now.

This kind of a calendar helps alleviate some of the conflicts with scheduling against and around the NFL, a consistent ratings behemoth.

The commissioners who manage the CFP don’t have the power to unilaterally make this change. It’s going to take buy-in from campuses, conferences and media partners.

The bowls will have no say. They are taking orders at this point and hoping to remain a prominent part of the system — which is why many in college football scoff at the Rose Bowl coming across as making demands.

Here’s a solution: Make the Rose Bowl a permanent semifinal, played on New Year’s Day, along with the Sugar Bowl in New Orleans.

At a time when so much tradition is being trashed in college sports, why not try to hold on to one of the best?

Follow Ralph D. Russo at https://twitter.com/ralphDrussoAP and listen at http://www.appodcasts.com