By DAVE SKRETTA The Associated Press 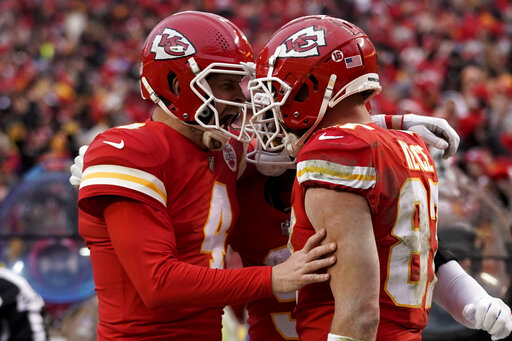 KANSAS CITY, Mo. (AP) — The experience is evident in the salt that peppers the beard of Chiefs quarterback Chad Henne.

The 37-year-old journeyman has hung around the league for nearly 15 years, his days as a starter in Miami and Jacksonville long distant memories. For the past five years, Henne has been little more than a backup quarterback for Patrick Mahomes in Kansas City, his job to hold clipboards and provide encouragement more so than to throw any passes.

It would’ve been easy to grow complacent over all that time. Yet the consummate professional has learned to be ready for anything, and anything happened in the first half of Saturday night’s playoff game against the Jaguars.

Pressed into service when Mahomes hurt his right ankle, Henne responded by leading the Chiefs on a 98-yard touchdown drive, which not only kept Jacksonville from seizing control but eventually provided the winning margin in a 27-20 victory that advanced Kansas City to its fifth consecutive AFC championship game.

“Definitely, nerves are high,” Henne said afterward, “but once you get in the game and get going, it’s just like, repetition. It’s not like I’ve never done it before. I played in enough games. When the opportunity is called upon, I’m ready.” 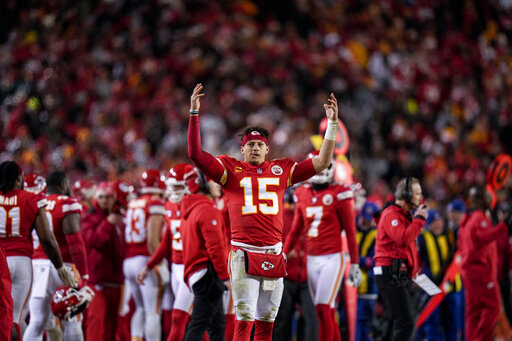 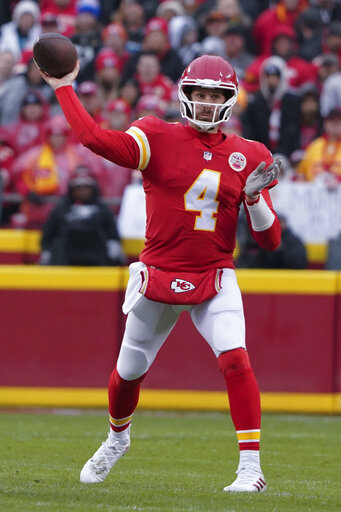 Mahomes returned after halftime and finished things out, and he intends to start next week’s AFC title game. But Henne proved once more the importance of a capable backup quarterback, an often-thankless job typically filled by failed starters, players long past their prime or young prospects not yet ready to take over a team.

Henne fits that mold, and there he was, watching from the sideline amid sleet and snow Saturday night as Mahomes was dragged to the turf by Jaguars pass rusher Arden Key, whose full body weight landed on the MVP candidate’s ankle.

Mahomes slowly stood up, barely able to put pressure on it, as a nervous hush descended over Arrowhead Stadium. He gutted out three more plays to finish the first quarter, then two more to set up a field goal, before Chiefs coach Andy Reid cornered him on the sideline and gave his star an ultimatum.

“I thought I could play through it,” Mahomes said, “and he said, ‘I’m not putting you back in so you might as well go get the X-ray, and then if it’s negative or whatever, I’ll put you back in.”

So, throwing his winter coat to the ground in frustration, Mahomes headed up the tunnel to the Kansas City locker room.

Henne traded his baseball cap for a football helmet and headed onto the field.

The Jaguars didn’t do him any favors, backing the Chiefs up to their own 2 with a punt. But the confidence that Reid and offensive coordinator Eric Bieniemy had in him was evident by their first play call: a pass play from his own end zone.

Henne completed it to Travis Kelce, one of 14 on his night. Then he hit Kadarius Toney later in the drive, and found Kelce twice more, on one of them getting crushed late by Key and drawing a personal foul penalty.

On the 12th and final play of the drive, Henne hit the All-Pro tight end one last time for the touchdown.

“To come in a hostile game, backed up to your 2, go 98 yards,” Kelce said, “that just shows the type of competitor he is.”

It wasn’t the first time Henne has saved a season. In another divisional game two years ago, when Mahomes was forced into the concussion protocol, he guided the Chiefs through the final two quarters to a 22-17 win over the Browns.

“It’s not a one-man show,” Henne said. “There’s a lot of great guys on our offense that really stepped up and helped me.”

Kelce topped the list. But Isiah Pacheco, a seventh-round draft pick, had the bulk of his 95 yards rushing on Henne’s drive, and his offensive line largely kept one of the league’s best defenses from laying a finger on him.

Perhaps they were inspired by Henne. Or put at easy by the fact that he was cracking jokes in the huddle.

“I don’t know if it was the jokes,” he said. “It was looking the guys in the eye, exemplifying some of the words in the offense that we do, and just really getting their attention and knowing that you believe in them as well as them believing in me.”

Henne was ready to play the rest of the way. But after X-rays on Mahomes came back negative, and he had proved to Reid that he was mobile enough to protect himself, he successfully negotiated his way back into the game.

With Henne again watching from the sideline, the All-Pro quarterback led the Chiefs the rest of the way to victory.

Mahomes was due to get an MRI exam Sunday, but he vowed to be ready for next week’s AFC championship game against the winner of the Bengals-Bills game. You can bet one thing, though: Henne will be ready, too.