HS Football Preview: John Marshall plans to redefine what it means to be a Rocket

(ABC 6 News) — John Marshall football is set to begin a new era under new head coach Kyle Riggott. And the Rockets are excited to reintroduce themselves to southeast Minnesota as the football season is poised to begin.

The 2022 Rockets’ goal consists of one word: Redefine. It’s a word that coach Riggott is hammering through as he takes the reigns of a program that has been trying to find itself for the past few seasons.

“We’re just trying to redefine what it means to be a rocket football player,” Coach Riggott explained. “Redefine the quote-unquote grind of the offseason. Really, what it boils down to is we’ve been able to redefine our relationships, put each other first as human beings and then end up playing some pretty good football…”

Already, the players feel a new way about the team’s direction, saying they could tell by how offseason training has panned out.

“Back in the past, we haven’t just had the best mentality,” senior Rockets receiver/safety Michael Nicometo said. “But now, we’re coming into the season, we got speed, we got aggression. Really, nobody’s missed a day. Usually, in the past, we’ve had people missing but everybody’s locked in, everybody’s motivated, everybody’s down for what we’re doing here now.” 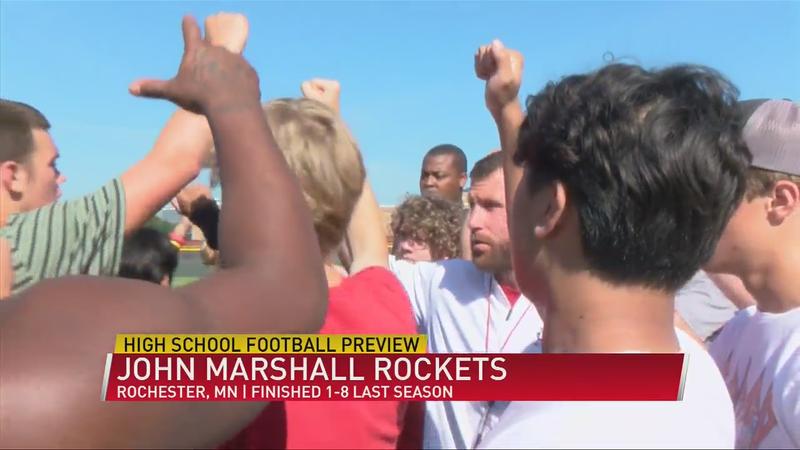 “We’ve done a lot of activities like dodgeball,” fellow senior wideout and safety Zach Ladu added. “I’d say the team scrimmages, like the two different groups we have going on, is building chemistry between JV, varsity and stuff like that. But just the coaches having fun with us and we’re just enjoying it.”

The Rockets have been focusing on speed and attacking right off the bat as part of new schemes and calls in Coach Riggott’s playbook.

“So, we’re trying to have answers for any front that we see or any box that we see,” Coach Riggott explained. “We have a ton of athletes that can play a multitude of different positions, give them opportunities to make a lot of plays.”

While the playoffs are certainly a goal, what matters to the Rockets right now is becoming a competitive team again. It’s not so much if they can keep up with other schools, they want other schools to keep up with them.

“We’re not thinking about last year, it’s this year,” Nicometo clarified. “You think we’re going to be the same team last year? Well, I hope you have that same mentality when we come in because we’re going to dog.”

“The reputation that we’ve built these past couple of years,” Ladu stated. “They’re not expecting much. We’re going to come out, we’re going to do what we can and we’re going to be as good as we can.”

The Rockets home opener is against Mankato West, that’ll be at home on September 2 at 7 PM.