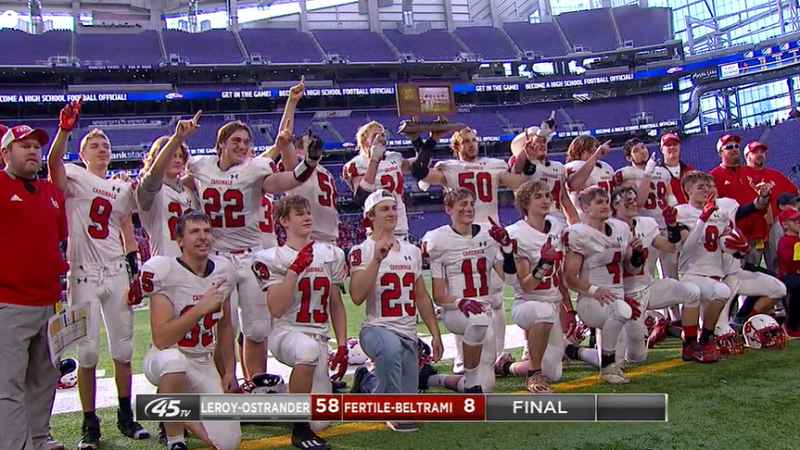 LeRoy-Ostrander making their first appearance at state since 2004 faced Fertile-Beltrami at U.S. Bank Stadium on Saturday in the state football championships and won in dominating fashion, 58-8.

On the Cardinals’ first possession, Chase Johnson put his team on the board first, finding junior Tristan Lewison for a 29 yard touchdown pass, 7-0 Cardinals.

After a 3 and out by the Falcons, senior Chase Johnson ran all over the field weaving his way to the endzone, netting 54 yards to tack on 6 more for the Cardinals, 14-0.

The Falcons worked their way into the red zone but Rylin Petry’s 3rd down pass was intercepted by Tanner Olson.

First play of the second quarter, Chase Johnson finished off a 5 play, 69-yard drive with a 38-yard dime to Tristan Lewison for six more, 21-0.

Another huge play by senior Tristan Lewison as he picks off a tipped pass for LeRoy-Ostrander and returns it to the Fertile-Beltrami 31 yard line. Johnson capped off a 31-yard drive with a touchdown run from 1 yard out, 28-0 Cardinals.

A sack on fourth down by Gavin Sweeney helped lead the Cardinals to add on another touchdown. This time it’s Sweeney on the receiving end of a 10-yard pass to cap off their longest scoring drive of the first half at 69 yards, 34-0.

Falcons get on the board late in the second quarter, a 60-yard drive ends with a 1-yard run by Everett Balstad, 34-8. With 40 seconds left, Chase Johnson tosses a 55-yard bomb to Layne Bird for six more for the Cardinals, 41-8.

The 2nd half was no different, Cardinals pounded the ball on the ground, Tanner Olson finished off a 68-yard drive with another score from 3 yards out, 48-8.

The Falcons had no answer for the rushing game of the Cardinals, the big man Tanner Olson added a 36-yard score making it 55-8 heading into the fourth quarter.