By BRIAN SLODYSKO The Associated Press

Former Missouri Gov. Eric Greitens delivers a concession speech in his bid for the Republican nomination for U.S. Senate during a watch party at the close of Missouri's primary election, Tuesday, Aug. 2, 2022, in Chesterfield, Mo. (AP Photo/Jeff Roberson)[ASSOCIATED PRESS/Jeff Roberson]

WASHINGTON (AP) — In one of the biggest days of this year’s primary campaign season, voters rejected a measure that would have made it easier to restrict abortion rights in red-state Kansas and repudiated a scandal-tarred former governor seeking a U.S. Senate seat in Missouri.

Meanwhile, a Republican congressman who voted to impeach then-President Donald Trump after the Jan. 6 insurrection lost to a Trump-backed opponent early Wednesday, while two other impeachment-supporting House Republicans awaited results in their primaries in Washington state. 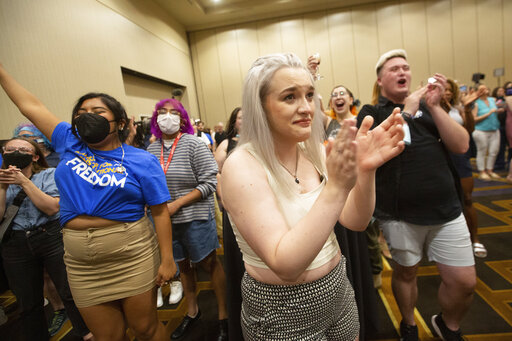 Allie Ugley, middle, an Allen County resident, holds back tears after hearing the news that the "No" votes won on a proposed amendment to the Kansas Constitution from the Kansans for Constitutional Freedom election watch party at the Overland Park Convention Center in Overland Park, Kan., Tuesday, Aug. 2, 2022. (Evert Nelson/The Topeka Capital-Journal via AP) 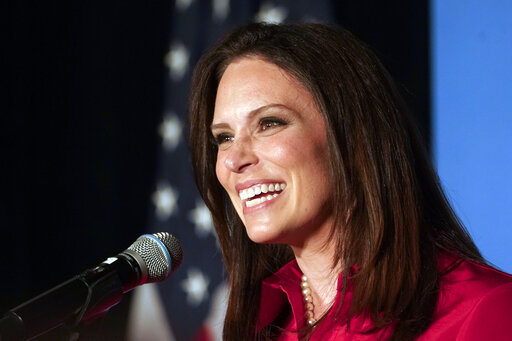 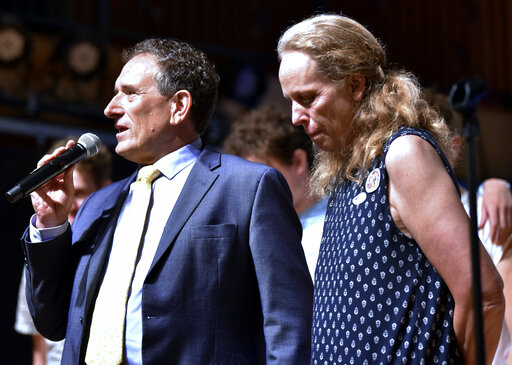 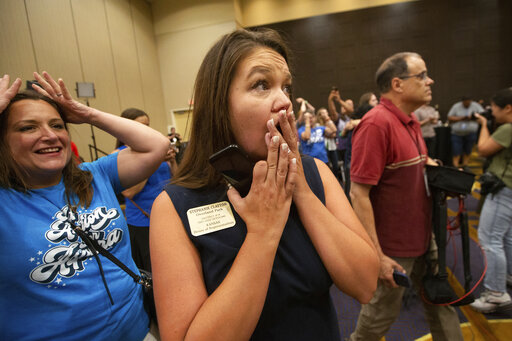 State Rep. Stephanie Clayton, D-Overland Park, reacts to Tuesday evening, Aug. 2, 2022, at the Overland Park Convention Center in Overland Park, Kan., to election returns on an abortion referendum. Kansas voters on Tuesday protected the right to get an abortion in their state, rejecting a measure that would have allowed their Republican-controlled Legislature to tighten abortion restrictions or ban it outright. (Evert Nelson/The Topeka Capital-Journal via AP) 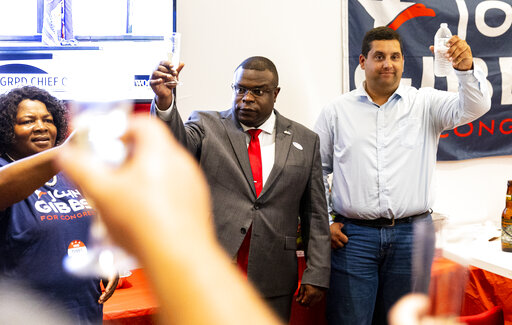 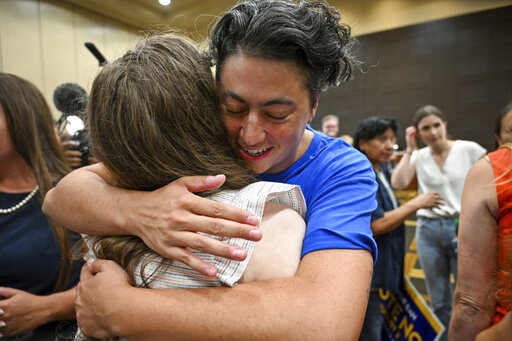 Iman Alsaden, chief medical officer for Planned Parenthood Great Plains, hugs Rachel Sweet, campaign manager for Kansans for Constitutional Freedom, Tuesday, Aug. 2, 2022, at the Overland Park Convention Center in Overland Park, Kan. Kansas voters protected the right to get an abortion in their state, rejecting a measure that would have allowed their Republican-controlled Legislature to tighten abortion restrictions or ban it outright. (Tammy Ljungblad/The Kansas City Star via AP)

Kansas may seem like an unlikely place for abortion rights supporters to notch a major victory.

But on Tuesday, voters in the conservative state resoundingly rejected a constitutional amendment that would have allowed the Legislature to ban abortion. It was the first major test of voter sentiment since the Supreme Court ruling in June to rescind the 1973 Roe v. Wade decision that legalized abortion nationwide.

The amendment would have allowed the Legislature to overturn a 2019 state Supreme Court decision declaring access to abortion a “fundamental” right under the state constitution.

Its failure at the ballot in a state Donald Trump won by nearly 15 points issues a stark warning to Republicans, who have downplayed the political impact of the high court’s ruling. It also hands a considerable win to Democrats, who are feeling newly energized heading into what was expected to be a tough midterm election season for them.

Kansas currently allows abortion until the 22nd week of pregnancy. After that, abortion is allowed only to save a patient’s life or to prevent “a substantial and irreversible physical impairment of a major bodily function.”

Gov. Laura Kelly, a Democrat who supports abortion rights, has warned that the Republican-led Legislature’s efforts to ban abortion would hurt the state. On Tuesday it became clear that many voters agree with her.

First-term Michigan Rep. Peter Meijer was one of 10 Republicans who joined Democrats to vote in favor of impeaching Trump after the Jan. 6, 2021, Capitol attack. On Tuesday, he became the latest victim of the former president’s revenge campaign.

Meijer, an heir to a Midwestern grocery store empire and a former Army reserve officer who served in Iraq, lost the GOP contest to former Trump administration official John Gibbs.

“I’m proud to have remained true to my principles, even when doing so came at a significant political cost,” Meijer said in a statement.

Besides having Trump’s endorsement, Gibbs also shared Trump’s penchant for conspiracy theories: He parroted Trump’s lies about a stolen 2020 election and once spread false claims that Hillary Clinton’s 2016 campaign chair participated in a satanic ritual that involved bodily fluids.

But Gibbs also drew support from an unusual source: House Democrats’ campaign arm spent nearly $500,000 in the final week of the race on ads that played up his ties to Trump and labeled him “too conservative.” It was a ploy by the Democrats to boost a general election candidate who they believe will give Democrat Hillary Scholten a better chance of winning in the general election.

Meijer is the second of the 10 impeachment-supporting Republicans to lose his primary, joining South Carolina Rep. Tom Rice, who was defeated by a Trump-backed challenger in June. Four others opted to retire rather than face voters’ wrath. And, so far, only California Rep. David Valadao has survived — just barely.

Also on the ballot Tuesday were Washington state Reps. Jaime Herrera Beutler and Dan Newhouse, who both faced Trump-backed challengers over their impeachment votes. But those contests were too early to call because Washington state conducts elections by mail, delaying the reporting of results.

Herrera Beutler’s challengers include Joe Kent, a former Green Beret who has cultivated links to right-wing extremist groups and employs a campaign aide who was a member of the Proud Boys. Newhouse’s opponents include Loren Culp, a former GOP gubernatorial nominee who falsely claimed that his 13-point loss to Democratic Gov. Jay Inslee in 2020 was the result of voter fraud.

Trump’s candidates in Arizona had a successful primary night.

Senate candidate Blake Masters, whose campaign was bankrolled by tech investor Peter Thiel, won his Republican primary after echoing Trump’s lies of a stolen election and playing up cultural grievances that animate the right, including critical race theory and allegations of big tech censorship.

In the secretary of state race, Mark Finchem, an Arizona state lawmaker who worked to overturn Trump’s 2020 loss in the state, defeated three challengers, including an establishment-backed rival.

In the state Legislature, Arizona House Speaker Rusty Bowers, who testified at a Jan. 6 committee hearing about Trump’s pressure to overturn the 2020 election, lost his Republican primary for a state Senate seat to a Trump-backed former lawmaker, David Farnsworth.

The Republican gubernatorial contest between former TV news anchor Kari Lake, who was backed by Trump, and businesswoman Karrin Taylor Robson, who was endorsed by Trump’s estranged vice president, Mike Pence, was too early to call on Wednesday, with Lake and Robson separated by a slim margin. Lake has aggressively promoted Trump’s election lies.

Arizona has emerged as a key swing state. But it also carries significance to Trump after Joe Biden became the first Democratic presidential candidate in decades to carry what was once a reliably Republican state.

Democratic hopes of picking up a U.S. Senate seat in deep-red Missouri faltered Tuesday after Republican voters selected Attorney General Eric Schmitt as their nominee over former Gov. Eric Greitens, who resigned in disgrace in 2018.

Greitens, they predicted, would be toxic in a general election. Democrats landed a strong recruit in beer heir Trudy Busch Valentine, who won her primary Tuesday. And the state’s Republican establishment prepared to put millions of dollars behind an independent candidate in the general election, potentially fracturing the GOP vote.

But Greitens came up short Tuesday, finishing a distant third behind Schmitt and U.S. Rep. Vicky Hartzler. His campaign’s tailspin can likely be traced back to March, when his ex-wife submitted a bombshell legal filing in the former couple’s child custody case.

Sheena Greitens said in a sworn statement that Eric Greitens had abused her and one of their young sons. She also said he displayed such “unstable and coercive behavior” in the lead-up to his 2018 resignation that others took steps to limit his access to firearms.

At the time, Greitens faced potential impeachment after his former hairdresser testified that he blindfolded and restrained her in his basement, assaulted her and appeared to take a compromising photo to pressure her to keep quiet about an affair.

He resigned from office — and avoided testifying under oath about the affair.

He launched his comeback campaign for Senate last year, marketing himself as an unabashedly pro-Trump conservative. And while many in Missouri wrote him off, one important political figure didn’t: Donald Trump, who mused publicly about Greitens’ attributes.

But in the end, Trump stopped short of issuing an endorsement, instead issuing a vague statement this week throwing his support behind “ERIC.”

And on Tuesday, the other “ERIC” in the race — Schmitt — won.

At its essence, Michigan’s raucous Republican gubernatorial primary was a contest of which candidate’s personal baggage was the least disqualifying. On Tuesday, conservative media personality Tudor Dixon was the victor, setting up a November general election against Democratic Gov. Gretchen Whitmer in the battleground state.

Dixon’s past as an actor in a series of vulgar and low-budget horror movies became a campaign issue. But her career moonlighting in titles such as “Buddy BeBop Vs. the Living Dead” and a vampire TV series called “Transitions” paled in comparison to her rivals’ problems.

One rival, Ryan Kelley, faces federal misdemeanor charges after he was recorded on video in Washington during the Jan. 6 insurrection directing a mob of Trump supporters toward a set of stairs leading to the U.S. Capitol. Kelley has pleaded not guilty.

Another, Kevin Rinke, is a former car dealer who settled a series of lawsuits in the 1990s after he was alleged to have made racist and sexist comments, which included calling women “ignorant and stupid” and stating that they “should not be allowed to work in public.”

A third, Garrett Soldano, is a chiropractor and self-help guru who has sold supplements he falsely claimed were a therapeutic treatment for the coronavirus.

Many in the state’s Republican establishment, including billionaire former Trump education secretary Betsy DeVos, view Dixon as their best shot at defeating Whitmer. Trump endorsed Dixon in the race Friday, just a few days before the primary.

But her primary victory is an outcome few would have predicted months ago. In addition to the shortcomings of her rivals, her path was cleared when the two best-known candidates in the race were kicked off the ballot in May for submitting false petition signatures.