By DAVID BILLER and NATÁLIA SCARABOTTO The Associated Press

FILE - A supporter of Brazilian President Jair Bolsonaro salutes while singing the nation's anthem outside a military base during a protest against his reelection defeat in Sao Paulo, Brazil, Nov. 3, 2022. The capital uprising by Bolsonaro's supporters on Jan. 8, 2023 failed to overthrow democracy, but millions here believe so strongly in Brazilian-style social conservatism that the movement will persist without its namesake, according to academics who study the Bolsonarita movement and members of the movement themselves. (AP Photo/Matias Delacroix, File)[ASSOCIATED PRESS/Matias Delacroix]

RIO DE JANEIRO (AP) — Brazil’s defeated former president, Jair Bolsonaro, was in Florida this month when his supporters tried — but failed — to overthrow the country’s young democracy. It was a sign that many in Latin America’s largest nation believe so fiercely in his movement that it can persist without its namesake.

Although Bolsonarismo appears disoriented at the moment, the broader trend will endure. That’s according to academics who study the movement and participants in the trend themselves, from the far-right radicals who stormed the capital to more ordinary Brazilian social conservatives. Many feel that leftist Luiz Inácio Lula da Silva was such a threat to their country that his victory required the military to prevent him from taking office.

Daniel Bressan, 35, traveled 300 miles from the interior of Parana state to join protesters in the capital, Brasilia. He was taken into custody on Jan. 9, the morning after he and thousands of others invaded Congress, the Supreme Court and the presidential palace.

“Bolsonaro brought the spirit of patriotism and family values back to the people, and now we have to unite to keep fighting,” Bressan, who denies vandalizing the buildings, said by phone on Jan. 10 from inside the federal police’s temporary holding center. “From Bolsonaro himself, we don’t expect anything.”

On the campaign trail in 2018, Bolsonaro tapped into outrage sparked by a sprawling corruption investigation into public figures. The seven-term lawmaker cast himself as an outsider to segments of society that felt undeservedly sidelined.

FILE - Protesters, supporters of Brazil's former President Jair Bolsonaro, hold a banner that reads in Portuguese "Civil and Military Intervention!" as others storm the the National Congress building in Brasilia, Brazil, Jan. 8, 2023. The capital uprising by Bolsonaro's supporters on Jan. 8, 2023 failed to overthrow democracy, but millions here believe so strongly in Brazilian-style social conservatism that the movement will persist without its namesake, according to academics who study the Bolsonarita movement and members of the movement themselves. (AP Photo/Eraldo Peres, File) 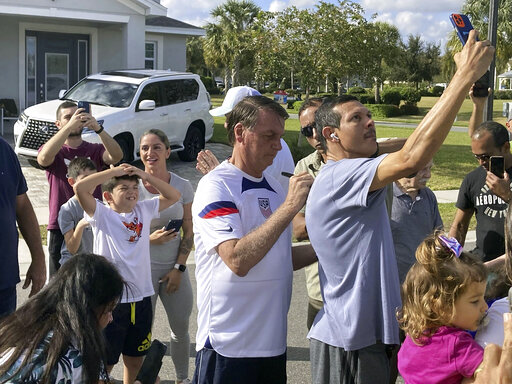 FILE - Former Brazil President Jair Bolsonaro, center, meets with supporters outside a vacation home where he is staying near Orlando, Fla., on Wednesday, Jan. 4, 2023. The capital uprising by Bolsonaro's supporters on Jan. 8, 2023 failed to overthrow Brazilian democracy and Bolsonaro flew to Florida, but millions of people in Brazil believe so strongly in Brazilian-style social conservatism that the movement will persist without its namesake, according to academics who study the Bolsonarita movement and members of the movement themselves. (Skyler Swisher/Orlando Sentinel via AP, File)

FILE - Protesters, supporters of Brazil's former President Jair Bolsonaro, clash with police as they storm the Planalto Palace, the official workplace of the president, in Brasilia, Brazil, Sunday, Jan. 8, 2023. The capital uprising by Bolsonaro's supporters on Jan. 8, 2023 failed to overthrow democracy, but millions here believe so strongly in Brazilian-style social conservatism that the movement will persist without its namesake, according to academics who study the Bolsonarita movement and members of the movement themselves. (AP Photo/Eraldo Peres, File)

Some quietly shared his taboo nostalgia for the military dictatorship. Bolsonaro, a former army captain, has supported torture and said the regime should have killed even more communists than it did. Other hardcore supporters were drawn to his exaltation of conservative values, his full-throated embrace of Christianity and his push to arm the general public. Bolsonaro became the “symbolic glue” holding these groups together, according to anthropologist Isabela Kalil, coordinator of the Extreme Right Observatory.

“It’s more about how supporters mobilize the image of Bolsonaro than about his actions themselves,” said Kalil. “Those images are independent from the figure of Bolsonaro. He controls them partially, but not totally.”

Radicalism deepened at the encampments that mushroomed outside military buildings nationwide after Bolsonaro’s loss, with die-hard backers demanding the army intervene to overturn the closest race since the nation’s return to democracy over three decades ago. Bolsonaro had repeatedly characterized Lula as a thief who would plunge the nation into communism.

Bolsonaro has been virtually invisible since the election, surprising many who expected a show of righteous indignation after months casting doubt on electronic voting machines. While he didn’t concede defeat and requested that millions of ballots be annulled, he also refrained from crying fraud.

Two days before Lula’s inauguration, Bolsonaro went to Florida. A week after the inauguration, without any apparent signal from Bolsonaro or the military, rioters took action. The horde smashed windows, trashed artworks, sprayed fire extinguishers and firehoses. Into a wooden table in the Supreme Court, someone carved: “Supreme are the people.”

To the limited extent that Bolsonaro commented on the uprising, it was to say that destroying public property was a step over the line. Many of his supporters were left disappointed.

“Trying to distance himself from what happened causes him to lose his link to the base that coordinated these attacks,” said Guilherme Casarões, a political scientist at the Getulio Vargas Foundation, a university and think tank. “The attack in Brasilia was a shot in the foot and weakens Bolsonarismo as a personalist, radical movement, its two fundamental characteristics.”

Bolsonaro’s party had intended for him to be a leading voice in the opposition, yet it remains unclear when he will return from Florida. Back home, several investigations targeting him could strip him of his ability to run for office.

His far-right allies who were elected to office have the opportunity to claim his political spoils for themselves and are vocally defending arrested rioters. Paulo Baía, a sociologist and political scientist at the Federal University of Rio de Janeiro, said he believes that “the term ‘Bolsonarismo’ will disappear in coming months,” even as the movement continues onward, diluted among other actors.

Unlike Bolsonaro, U.S. President Donald Trump was present on Jan. 6 just before the attack on the Capitol, urging his followers to the building. He has continued defending their behavior since and tried to make support for the election lies that fueled the attack a defining issue in November’s elections. The Republican party underperformed, however, rendering Trump’s position within it more precarious than at any time since 2016.

Thomas Carothers, co-director of the Democracy, Conflict and Governance program at the Carnegie Endowment for International Peace, said the U.S. and Brazilian riots have no true precedents elsewhere and it is hard to predict what will happen next, but they may have marked high points for both their populist inspirations’ political power.

“We need to stop thinking about just Bolsonaro. Bolsonaro isn’t the principal leader,” Alberdan Souza, 28, who administers a Telegram channel about geopolitics, said by phone from Juazeiro do Norte in Brazil’s poor northeast, where he said he is the rare schoolteacher to be proudly right-wing. “He is the guy who caused a surge for the right and for the feeling of Brazilian patriotism, but the movement is much bigger than Bolsonaro.”

Radicals have remained engaged on social media, firstly washing their hands of responsibility for the destruction by blaming supposed left-wing infiltrators.

And they continue issuing calls to stay mobilized so the military can act, announcing general strikes and the shutdown of refineries and gasoline stations to grind Brazil to a halt, according to Marie Santini, coordinator of NetLab, a research group at the Federal University of Rio de Janeiro that monitors social media. So far, further aggression in the real world has been limited. At least 12 transmission towers were attacked, several of which were toppled, according to the energy regulator.

“It isn’t that these calls were successful, but it demonstrates that the coup impetus remains strong,” Santini said. “Bolsonaristas show no sign that of stopping anytime soon.”

Three days after the uprising, a supposed “mega-protest to retake power” was ultimately a dud. At Rio de Janeiro’s Copacabana beach, police and journalists outnumbered the few demonstrators. It was a stark contrast with the scene in the same spot weeks before the election, with flyovers, paratroopers, warships and Bolsonaro delivering a stump speech to a jubilant crowd in his thrall.

“I lost my joy of living,” demonstrator Léia Marques, 65, said as she wept. Like other Bolsonaro supporters interviewed, Marques fears the crackdown targeting their movement.

Still, she isn’t giving up.

“People are mobilized on social networks and that has a lot of strength,” she said through tears. “We will stay strong on the streets.”