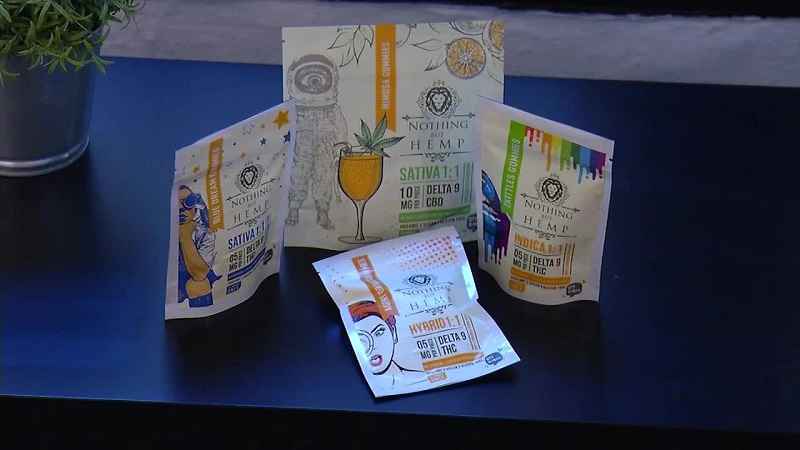 Packs of THC edibles are displayed at Nothing but Hemp in St. Paul. (KSTP/file)[KSTP]

There was little fanfare when the Minnesota State Legislature quietly passed a new law allowing intoxicating levels of THC in edible products like gummies and beverages. However, there was plenty of fanfare when the law actually took effect July 1.

“We have lines out the door,” said Steven Brown, CEO of Nothing but Hemp, as he stood outside his St. Paul store on July 1. “Online has been crazy.”

The state Legislature passed a law allowing 5 mg of THC, the primary intoxicant in marijuana, in individual products and up to 50 mg per package. The 5 mg limit is about half the amount allowed in states with recreational marijuana laws, but the products are still considered intoxicating.

The law passed even though some Republican lawmakers say they thought they were only passing technical changes to cannabis law and not legalizing intoxicating levels of THC.

The law restricts sales to people 21 and over, and packaging can’t be aimed at appealing to children. Other than that, there are few regulations about who can sell the products, and enforcement is largely up to cities and counties.

“I guess I was … surprised that these products were being sold before with absolutely no authority,” she told 5 EYEWITNESS NEWS. Edelson and some hemp industry officials say some tobacco shops and others were selling products with 50 to 100 mg of THC because there was a legal gray area.

Several Minnesota cities have put moratoriums on sales of the products or are considering such a move until they can figure out enforcement mechanisms.

In the meantime, the Minnesota Board of Pharmacy posted a link on its website where consumers can report retailers selling products with more than 5 mg of THC. They’ve also sent out a “THC enforcement checklist” to cities and local law enforcement to help monitor THC edibles sales.

“I’m so thankful cities are having this discussion,” Edelson said. “I don’t think even cities knew these products were being sold in their communities” before the new law passed. “Now we have a clear [guidelines]. … The Board of Pharmacy complaints can be made. Law enforcement have clear parameters — 5 mg. If it’s over that … 50 milligrams to a package … it’s illegal, and those products have to come off the shelves.”