Rev. Robert E. Barron installed as Bishop of the Diocese of Winona-Rochester 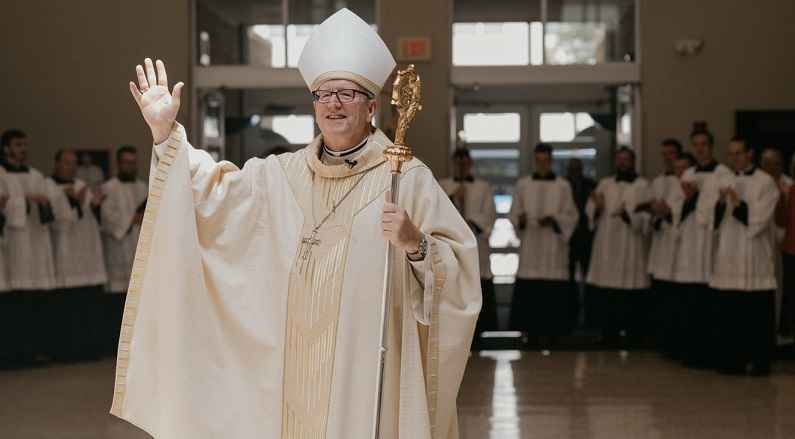 (ABC 6 News) – Rev. Robert E. Barron was installed as the ninth Bishop of the Diocese of Winona-Rochester.

Archbishop Bernard A. Hebda of the Archdiocese of St. Paul and Minneapolis and Archbishop Christophe Pierre, Apostolic Nuncio to the United States of America were present along with 25 other Cardinals and Bishops and over a hundred priests and deacons.

The Co-Cathedral was filled to capacity with friends and family of Bishop Barron and the faithful of the Diocese of Winona-Rochester who came to witness this joyous occasion.

Thousands of others were able to participate through livestream, the Eternal Word Television Network, Real Presence Radio, and Bishop Barron’s own Word on Fire Ministries.

“My heart is overwhelmed with joy and with gratitude today,” Bishop Barron remarked.

On June 2, 2022, the Holy See announced that Pope Francis appointed Bishop Barron, formerly Auxiliary Bishop of the Archdiocese of Los Angeles, as the ninth Bishop of the Diocese of Winona-Rochester. Bishop Barron, born on November 19, 1959 in Chicago, spent his childhood in Detroit and then in a suburb of Chicago.

Bishop Barron studied at Mundelein Seminary in Chicago and at the Catholic University of America in Washington, DC before being ordained a priest on May 24, 1986.

After serving as an associate pastor for three years, Bishop Barron was sent to study at the Institut Catholique de Paris where he completed his Doctorate of Sacred Theology. Bishop Barron served as a professor of theology at Mundelein Seminary from 1992 to 2015 and also served as its president-rector from 2012 to 2015. Bishop Barron launched his Word on Fire Catholic Ministries in 2000 and has been broadcast extensively throughout the world.

His 10-part documentary, Catholicism, aired on public television in the United States and he is the first priest since Venerable Archbishop Fulton Sheen to have a regular national program on a commercial television network. Bishop Barron, through his clear teaching and love of the Gospel, has been able to share the truth of the Gospel to millions through the internet and, in particular, social media.

The Diocese of Winona-Rochester serves the 20 southernmost counties of Minnesota with 99 parishes/missions, 84 priests, 298 sisters, 15 brothers, 3 consecrated virgins, 36 deacons, and over 136,000 Catholics. There are 23 Catholic Schools, St. Mary’s University, and the Immaculate Heart of Mary Seminary