MNF: Eagles counting on trio of ‘Batman’ receivers vs Vikings 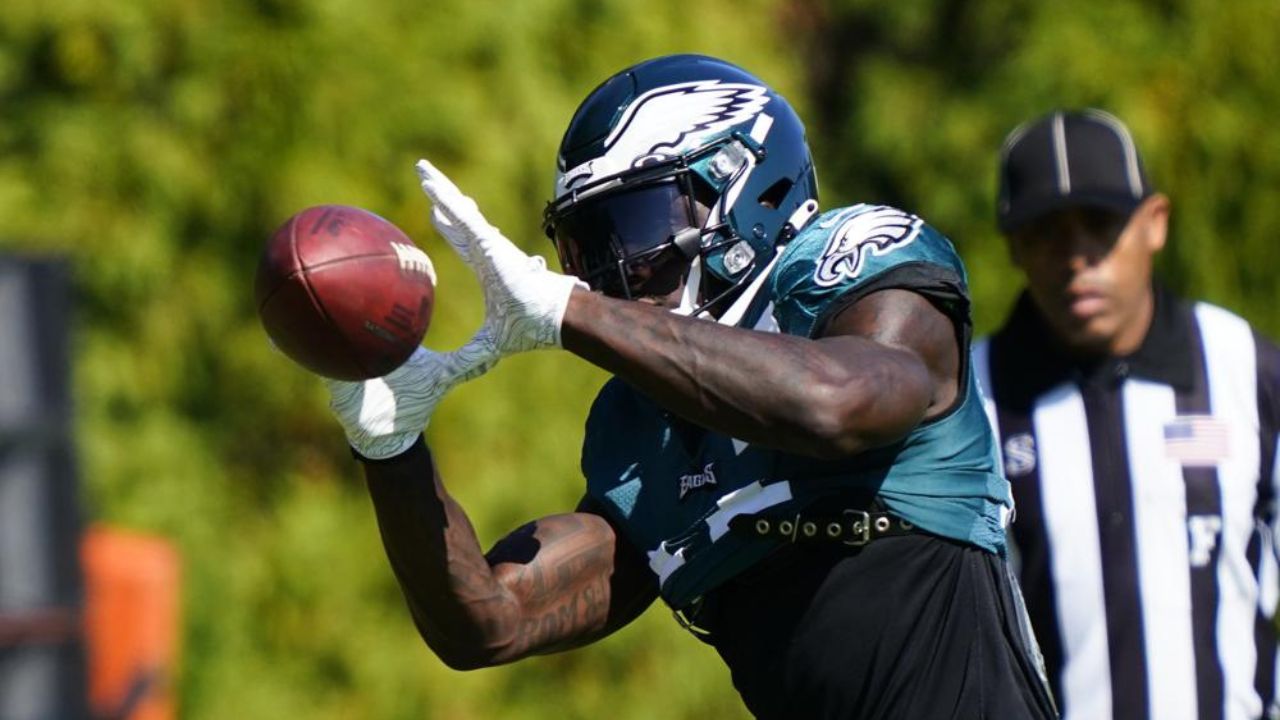 PHILADEPLHIA (AP) — Jalen Hurts has a trio of winged receivers — bats, of sorts, in this case as much as they are Eagles — in the offense and ready to Sock! Pow! Bam! their way into the end zone against Minnesota.

Who are those masked men?

Eagles cornerback Darius Slay sees on the field a twist on the popular Spider-Man pointing meme only with three receivers who can each stake a claim as the team’s “Batman.”

Like A.J. Brown, his tinted visor may hide his eyes, but his numbers popped in a win against Detroit with 10 receptions for 155 yards, tying his career high. Or Devonta Smith, who had a team rookie-record 916 yards receiving last year. And Quez Watkins, who had a 91-yard catch last season.

“I know you all see him with the dark visor, he just looks like a swole ‘Batman,’” Slay said of Brown. “You all can’t tell me he doesn’t look like a swole ‘Batman’. DeVonta is a skinny ‘Batman.’ Quez is a fast ‘Batman.’ We’ve got three Batmans on the team, one swole, one skinny, one fast.”

But there’s only one ball. So which receiver is ‘Robin’?

“No Robins. We’ve got no sidekicks,” Slay said. “We’ve got nothing but Batmans. Those boys fly. Let it fly.”

The Eagles might have a little fun planned on a dark night (under the lights, at least) in Philadelphia.

Brown was an instant hit in his first game with the Eagles — yes, he was the bane of Detroit’s existence — who immediately seemed worth the four-year contract he signed with the franchise after he was acquired from Tennessee in a draft-day trade. His 155 yards were the most by an Eagle since Alshon Jeffery had eight catches for 160 yards in December 2018 at the Los Angeles Rams. And those were the most yards receiving by a player in his Eagles debut.

Philly was buzzing over Brown. He just wasn’t listening.

Brown insisted he wasn’t scrolling the 280-characer Twitter bursts or reading the 650-plus comments on last week’s Instagram post. In an age where some celebrities denounce social media, Brown said he couldn’t bring himself to read his reviews because they were too positive.

“I don’t believe my own hype,” Brown said. “I’ve got to come in and work each and every day. It definitely can get into your head. Everybody wants to hear good things about them. I just try and focus on me. I feed myself whatever thoughts I need to feed myself for a game or for practice. I get myself prepared. I don’t want it to come from an outsider.”

Brown is part of a Monday night matchup that features two of the top receivers in the league.

Justin Jefferson, famously passed over by the Eagles in the 2020 draft, scored two touchdowns in the opener last week against Green Bay, when he dominated the Packers for 184 receiving yards in the 23-7 victory.

“I’ve always tried to go where my reads take me and I think it’s more of the coach’s credit that if the ball is going to Justin and able to keep going to him,” Vikings QB Kirk Cousins said. “But, the minute he’s covered, I’m going elsewhere. I’m not going to try to force the ball to him, but certainly, if he’s open, we’re going to try to get him the football.”

Eagles coach Nick Sirianni has watched Jefferson since the receiver put in a standout performance for LSU in the national championship game to cap the 2019 season.