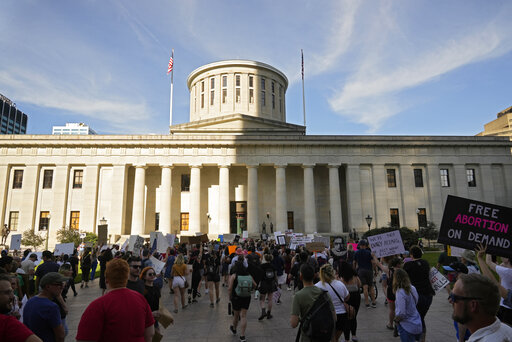 FILE - Protesters rally at the Ohio Statehouse in Columbus, Ohio, in support of abortion after the U.S. Supreme Court overturned Roe vs. Wade on June 24, 2022. A judge temporarily blocked Ohio’s ban on virtually all abortions, Wednesday, Sept. 14, 2022, again pausing a law that took effect after federal abortion protections were overturned by the Supreme Court in June. (Barbara J. Perenic /The Columbus Dispatch via AP, File)[ASSOCIATED PRESS/Barbara J. Perenic]

The decision means abortions through 20 weeks’ gestation can continue for now, in keeping with state law in place before the ban.

Hamilton County Judge Christian Jenkins’ decision to grant a 14-day restraining order against the law came as part of a lawsuit brought by the ACLU of Ohio on behalf of abortion providers in the state. The clinics argue the law violates protections in the state Constitution guaranteeing individual liberty and equal protection. The suit also says the law is unconstitutionally vague.

The law was signed by Republican Gov. Mike DeWine in April 2019, and prohibits most abortions after the first detectable “fetal heartbeat.” Cardiac activity can be detected as early as six weeks into pregnancy, before many people know they’re pregnant. The law had been blocked through a legal challenge, then went into effect after the landmark 1973 Roe v. Wade decision was overturned.

DeWine’s opponent in the November election, Democrat and abortion rights proponent Nan Whaley, called Wednesday’s ruling “a victory, albeit a temporary one, for Ohio women.” She said, “Ohio women won’t be safe until we have a pro-choice governor who doesn’t seek to impose extreme views like government mandates against private health care decisions.” 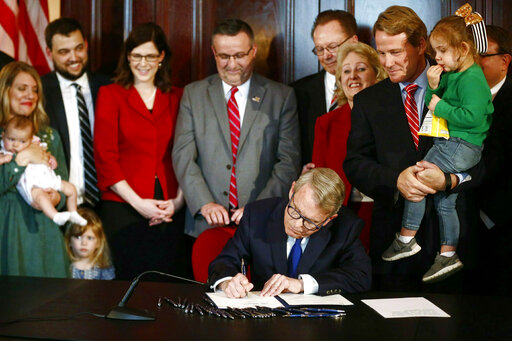 Abortion providers and their defenders have said the law has already created a host of hardships, including forcing a 10-year-old Ohio rape victim to travel to Indiana for an abortion.

The judge’s decision is a blow for abortion opponents, who have been celebrating implementation of the long-delayed restrictions since Roe was overturned.

Right to Life of Greater Cincinnati had anticipated the judge was leaning toward a pause after a hearing held last week, when he asked questions about the 10-year-old’s case and suggested, “We should just be very honest about what we’re talking about here.”

“Let’s just be very honest,” the anti-abortion group wrote in a statement, “it is always, always best when LIFE is chosen. Always.”