Spending the Mega Millions in Rochester

(ABC 6 News) – The Mega Millions jackpot has reached the 2nd largest amount in the lottery’s history at $1.28 billion. The winner can either take a cash prize (a lump sum) or 30 annual payments over 29 years.

The large jackpot has everyone asking the same question: What would you buy if you won the lottery?

“I’d upgrade to a new ride and enjoy the trip back home,” says Dana Havlick, who’s visiting from Amarillo, TX. His wife, Melody, added, “I would want to be buying a home, a grander home for grandbabies!”

Both of these options sound great, but what can money buy in Rochester, MN? ABC 6 News Anchors Devin Martin and Jessie Klinger went looking for the answer. 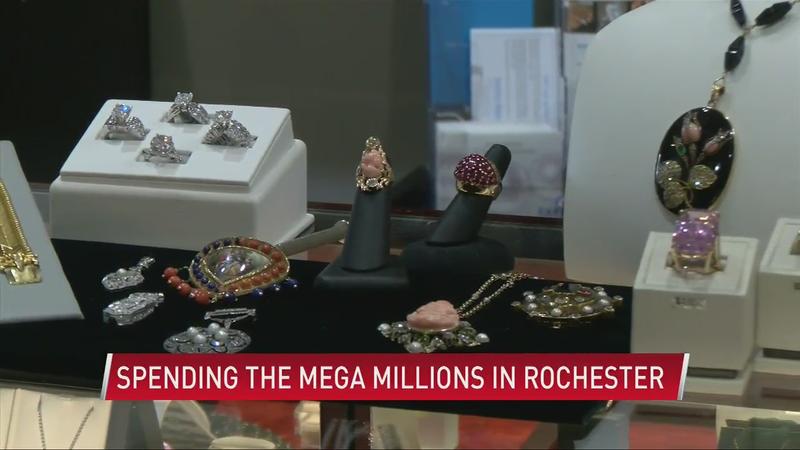 When people win a lot of money, one thing that comes to mind is jewelry. At the first stop, Hight & Randall, Personal Jeweler, some pieces are considered priceless.

“If you really love jewelry, you could actually buy the whole store, but that would be negotiable,” store co-owner Barbara Hight-Randall says. She loves all things diamonds and gems. “Good design is timeless.”

This is where you can find one-of-a-kind artwork, such as estate pieces, each of which tells its own story.

“Jewelry is wearable art when it’s done well,” Hight-Randall says, “it’s an expression of who you are.”

One set of diamond rings that the store displays adds up to $250,000, which is approximately the price of a luxury sports car. Which led Martin and Klinger to Rochester Chevrolet, where they found the need for speed.

One Corvette that caught their eye costs $109,999. Product Specialist Asher Albee says if he won a billion dollars, “Hands down, I’d get two of them. It’s truly America’s sportscar.”

Nice jewelry and cars aren’t the only things money can buy. Some people prefer to invest in collectibles, like some items at NerdinOut. From Star Wars to Marvel, there’s something for everyone. A life-size replica of a NECA-inspired SpiderMan is listed at $1,100 and has been a staple of the store since it opened.

One could also buy Obi-Wan Kenobi’s lightsaber, which has been retired from production. Store owner Brad Vigessaa says if he won the lottery, he would buy replicas of items from his favorite TV show, Masters of the Universe.

“As kids, we had all these toys and as adults, we work really hard and now we want to capture what we had as kids,” says Vigessaa.
“If we have the disposable money now, why not have stuff for decoration?”

The next Mega Millions drawing is at 11 p.m. ET at the WSB-TV studio in Atlanta.