Official services were canceled Sunday, but the congregation still came together in the church parking lot for drive-thru donuts and updates on the damage.

“I think that when difficult things happen people want to gather together support each other, help each other, talk about it and process it. We’ve been able to do that on Facebook, and in-person this morning,” said Kim Reid, the president of the First Unitarian Universalist Board.

One of the largest trees on the property fell into the religious education wing of the building, breaking a hole in the roof and bringing significant water damage. The fire department asked the church to cut power to the entire building to minimize risk of electrocution.

Two people were in the building when the roof collapsed, but neither were hurt. 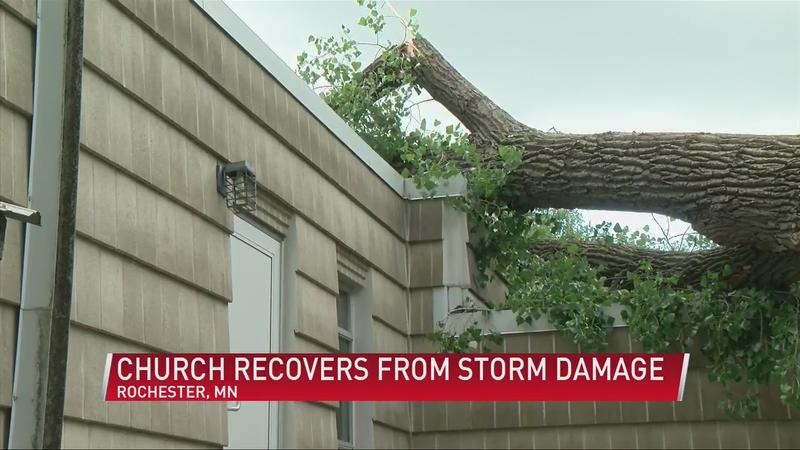 “We’re hoping that Sunday we’ll be able to have services in the main part of the church. But the religious education wing is going to be off-limits for a while until all the repairs are completed,” Reid said.

Church officials do not know yet when that could be. An arborist will start to remove the tree Sunday. Then the church will learn the cost of the damage.

In a message to the congregation on Facebook, explaining the damage, church officials said this:

“Sometimes things crack and break in life, which doesn’t make them any less beautiful or sacred. Instead, it invites us to hold the broken pieces with tenderness and care, and do what we can to fill the cracks with love. Love is something we know how to do.”