(ABC 6 News) – For over three decades, the Schreiber family has raised, trained, and shown draft horses in shows around the area.

Sadly, six years ago, Merle Schreiber passed away, but his family is carrying on his dream.

Merle and Jean Schreiber have raised their family and grown their farm in Plainview. They have 5 children, 14 grandchildren, and 9 great-grandchildren, and nearly all of them were at the Olmsted County Fairgrounds Friday for the draft horse show. All to continue what they started 35 years ago, and carry out Merle’s dreams.

Jean said she and Merle both started out riding saddle horses. But when they expanded their family, they decided to give draft horses a try.

“We couldn’t really take them all with us so we started getting draft horses so they could ride in the wagon then and we’ve been doing it ever since and our family has grown and all the kids come and help and they love it,” said Jean. 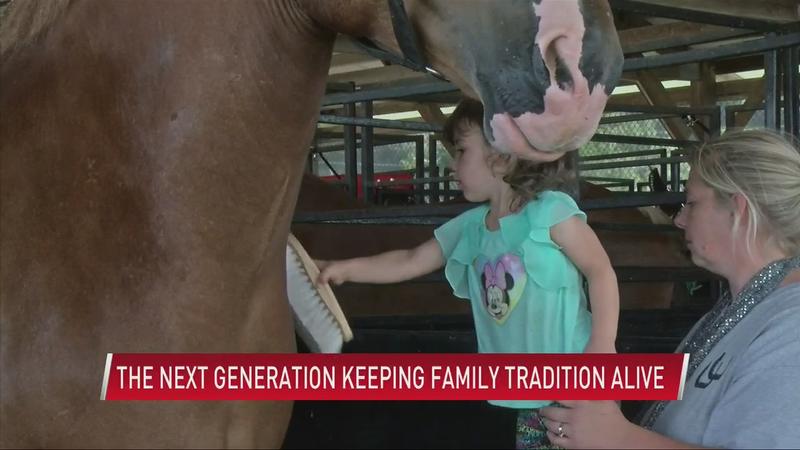 For the three and a half decades the Schreiber’s farm has been going, Merle always dreamed of his kids continuing their legacy. So, about nine years ago Merle and Jean handed the reins over to their youngest daughter Traci and her husband Seth. Jean said, “he was happy about that. He was so happy cause he wanted it to carry on. He figured the rest of the kids liked to help and they’d be in on it too.”

Traci is always thinking about her father. To this day she still gets emotional when she talks about how much this meant to her father that she’s carrying out her family legacy. Busy getting her horses ready before Friday’s show she could only get out but a few words.

Through the years the family has won numerous awards for their work with draft horses, but for Merle, his family and the farm always took first place. Jean said, “[He was] proud of his horses and his kids. His kids meant everything to him.”

Merle always told the kids no matter what just try their best, and today they did. Taking first place in the unicorn class.

To quote Hank Williams Jr. I guess it’s fair to say Traci, Seth and the whole gang are, “just carrying on an ole family tradition.”