(ABC 6 News) – In July of 2017, Mitch Brekke was in a cycling accident where he was run over by a car and broke 30 bones and survived.

Brekke’s friends and family joined him on a ride on Sunday for the five-year anniversary on Monday.

“It’s awesome. I’m very very lucky and I’m happy to have a bunch of friends to come and do it together,” Brekke said on Sunday morning. Cyclists met at the Bend in the Road in Albert Lea.

Brekke bled out one and a half times within a day. His wife, Haley Brekke, said they didn’t think Mitch would even walk again. But luckily when the accident happened on July 18, 2017 north of Mankato, an ex-special forces Medic was with Brekke.

“To pretty much save my life,” Brekke said. “I have the best community around here and the folks I ride with.” 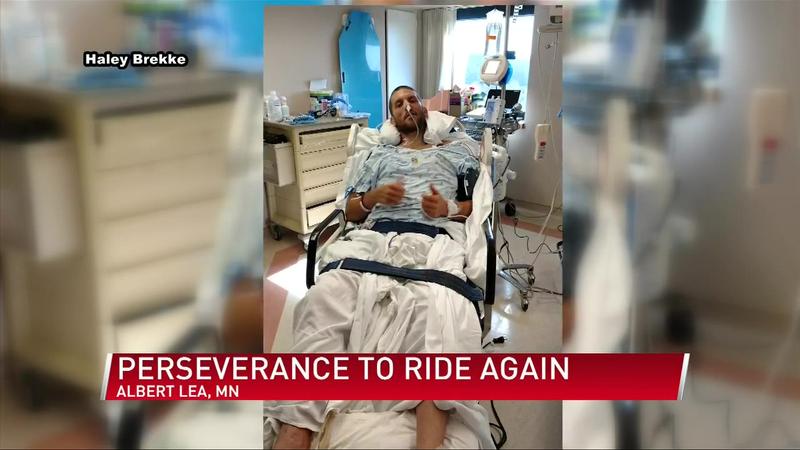 Brekke’s sister, Jenna Christensen, was a huge support during his recovery.

“It’s amazing to see what he’s been through,” Christensen said. “From the day we were in the hospital and not knowing if he’d walk or live and to see how he’s been so determined to get back on his bike like he bought a bike before he could walk again because he was like ‘I’m going to get back on a bike and I’m going to ride and that’s how I’m going to recover.’ So he’s been nothing but amazing through his recovery.”

Christensen said family and friends being with Brekke during his whole recovery is what she thinks got him through it.

“It doesn’t surprise me because everybody seems to love Mitch and cheer him on,” she said.

Even people who never met Brekke in person came to ride with him on Sunday.

“Actually a guy I’ve never met in real life that I actually race with online in the wintertime came up from Iowa even today,” Brekke said.

Some cyclists rode 40 miles while others rose 73 miles on the gravel roads on Sunday around the area that Brekke rides on all the time, including some of who were with him when the accident happened.

“He loves to plan a ride anytime he can. It’s what he loves to do so it’s what he wanted to do for coming up on five years,” Christensen said.

Not only is Brekke continuing to ride his bike almost 42,000 miles five years later, he and his wife got married last summer and had a baby three weeks ago.

Haley hopes his journey inspires others who have been through traumatic injuries to never give up.