A Father and Son Duo Unlike Any Other

(ABC 6 News) – It’s business in the front and a party in the back for an Austin Father and Son Duo!

Curtis Steinbrink competed last year in the USA Mullet Championships and placed 11th in the nation for his sick hair.

And now this year, his son Callen decided to be just like dad and grow a mullet too.

The city of Austin is known for Spam, but it’s also known for people who have awesome hair.

Callen is rocking his mullet, and he has his whole family supporting him. He’s competing this year in the USA Mullet Championships Kids Division, and he’s ready. 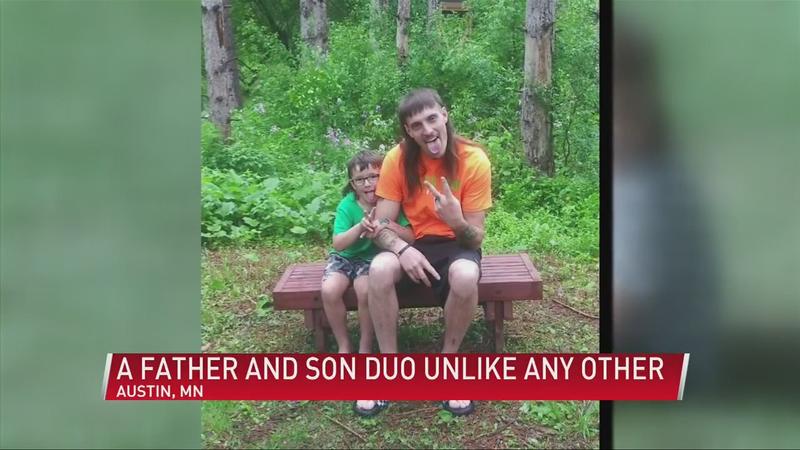 His dad Curtis competed last year in the men’s division, and his mullet got national attention.

“It’s still a shock to be 11th in the nation out of hundreds of mullets and now to get Callen to follow in my footsteps is pretty special,” Curtis Steinbrink said.

Mullets are important for the Steinbrinks. Curtis decided to grow one for his Aunt who passed away a few years ago.

“She got cancer and lost her hair. I decided that if I grow my hair, somebody can use it someday,” Curtis Steinbrink said.

This means a lot to Curtis. This father and son duo are unbreakable.

The top prize is $2,500 and more than 675 kids have registered nationwide.

“We have a pretty big support system so I feel like we’re going to go a bit farther this year,” Curtis Steinbrink said.

“Everyone wants me to get a mullet, but it’s not happening,” Cheyanne Steinbrink, Callen’s mom said.

After she had a chance to “mullet over” Callen’s mom Cheyenne decided the 80’s ‘do isn’t her thing, but that’s okay.
She’s glad to see people coming together to support her son.

“It’s all our friends and family who are making this possible, if we didn’t have them liking it, we wouldn’t make it that far. It’s so fun to see all the support.”