16 people recognized for their bravery during Taopi tornado

(ABC 6 News) – It’s been nearly four months since a tornado tore apart the tiny town of Taopi, Minnesota, Mower County is recognizing 16 staff members that were working through the nights, as well as awarding two men for saving lives.

In the middle of the devastating tornado, Gary Kasel received a call from his brother, Tom.

“Gary comes out of the room and he says ‘Tom’s house just got hit by a tornado,'” Gary’s wife, Laurette, said. “I thought he called to warn us to get in the basement, so me and the kids were running to the basement, and Gary is putting on his shoes. I said ‘what are you doing,’ and he said it was an emergency.”

While Tom and his girlfriend Jewel were going to the basement of their home to seek shelter, the powerful storm ripped the house right off of its foundation, completely shifting it off of the beams. Parts of the house collapsed, trapping Tom and Jewel under blocks of concrete. Because of the shift of the house, the couple we’re pinned under the rubble, completely exposed to the storm.

The two immediately knew they had broken multiple bones, rendering them unable to move. They knew they needed help fast. 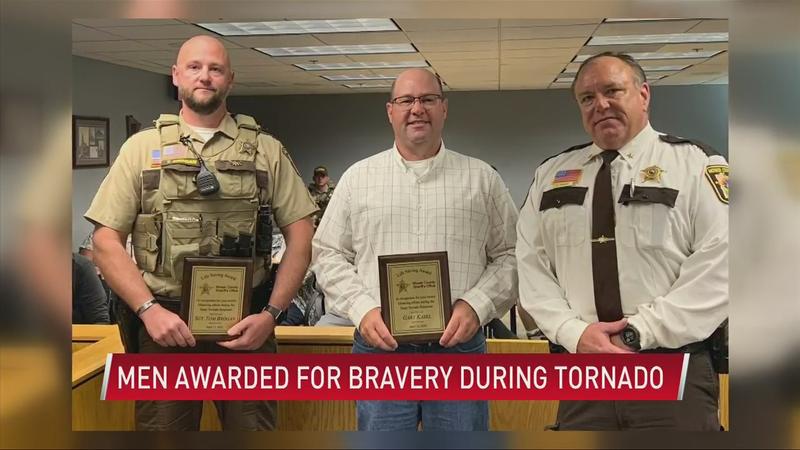 After receiving the call from his brother, Gary knew exactly what to do. He needed to help.

That night during the storm, Gary drove through the wind and rain to his brothers, driving directly over an exposed power line.

“I just was thinking about Tom and Jewel in that house. It’s like the house could move, anything could happen and they are literally down there, crying for help,” Gary recalled.

As he arrived to his brother’s house, Sergeant Tom Brogan was already there. The two were the couple’s only chance.

Sgt. Brogan and Gary exposed themselves to the eye of the tornado, lowering themselves into the open ditch that once was the basement. They began manually lifting concrete off of the couple, and doing what they could to lift them out of the rubble.

While the two heroes were strangers to one another, Gary recalls he couldn’t have saved his brother or Jewel without Sgt. Brogan’s help.

Tuesday morning, Gary and Sgt. Brogan were honored with the “Life Saver Award” for their courage during the storm.

“The two crafted a way to put themselves inside that infrastructure to actually extricate the two individuals inside. I would categorize that as extreme bravery,” Mower County Sheriff Steve Sandvik said.

Gary says he doesn’t believe himself to be a hero, and said anyone in his position would have done the same thing.

Sgt. Brogan was unable to comment on the award.

16 other employees, ranging from deputies to Public Works employees, were also given various certificates for their actions during the tragedy.

A complete list of the recipients is listed below.