(ABC 6 News) — A Winona mother says the situation with her son in Ukraine is dire.

In an exclusive interview with ABC 6, Tina Hauser says it’s the news she feared, her son has been taken by the Russian military. Hauser says the last time she spoke with her son Tyler, was Saturday morning when he was being forced to board a bus out of Kherson.

RELATED: Update: Winona mom still worried about son in Ukraine as he leaves behind wife, daughter

According to Tyler, all foreigners were being transported out of the country and he had to say goodbye to his Ukrainian wife and daughter. Hauser says Tyler’s wife contacted her saying her son was then taken by the Russian military at a checkpoint and placed on a different bus in Crimea, which is a Russian territory.

It has been more than 48 hours and Hauser says she has lost contact with her son.

"My worst nightmare is coming true, and I’m fearful that they are going to torture him and kill him and I’m not ever going to see my son again," said Hauser through tears.

RELATED: "I fear for the fact that I may not have a son" MN mom prays to be reunited with son stuck in Ukraine

Hauser says she has called the U.S. Embassy but has not heard back. She has also reached out to Senator Amy Klobuchar’s office for help.

ABC 6 reached out to the senator and we were told she was on a plane back from Poland Monday night. 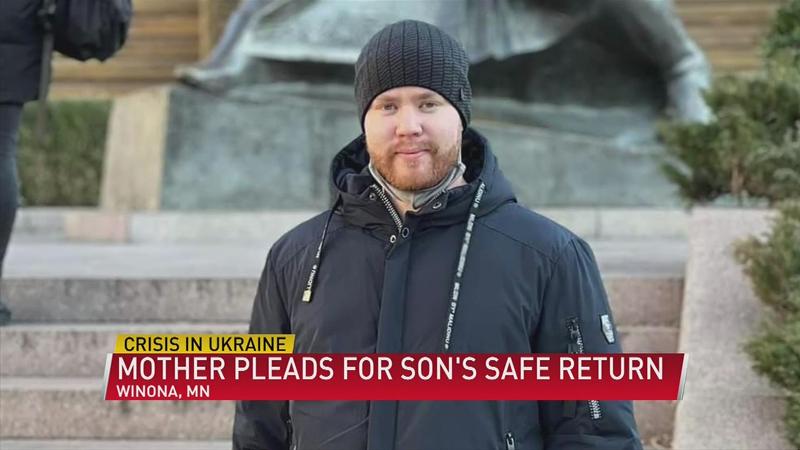 In a statement issued to ABC 6, Klobuchar said, "my heart goes out to the Hauser family and we will do everything to locate Tyler. My office is working with the State Department and U.S. Embassy in Moscow to find him and resolve this situation as quickly as possible."

Stay with ABC 6 News, as we continue to track developments in this case.