Warriors were led by Eli King with 17 points, Ja’Shon Simpson with 11 and Thane Meiners added 10 points. The win comes as Caledonia is in hot pursuit of reaching the title game once more after losing in that very match last season.

"Knowing the pace they wanted to play, a little bit slower, I think we did a great job of getting out to a fast start," King reflected postgame. "Where they had to play a little faster at least, I think it’s big again to have a big lead. That’s always better than be fighting just to get even again, so it’s big."

King noted after the game how the Yellowjackets made it difficult for Caledonia to cash in at the rim even as the Warriors were up by a strong margin.

"Yeah they were definitely trying to packing it in I’d say and trying to limit the points we got at the rim. They did a great job of it and they made us hit shots and we had a few guys that did, which was big." 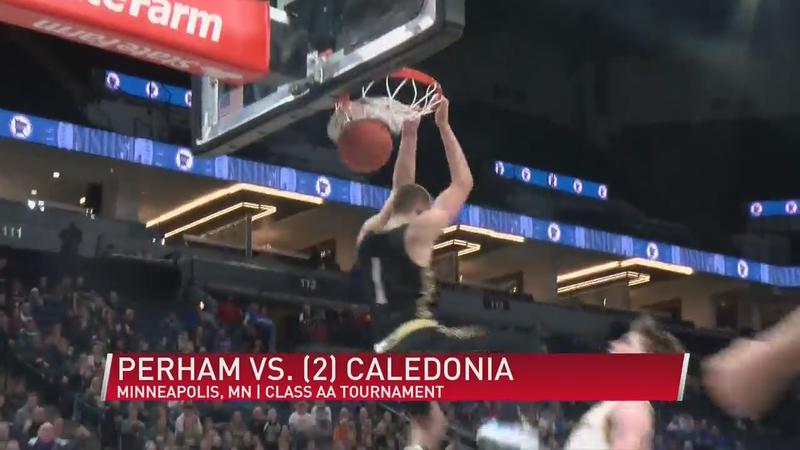 Head Coach Brad King expressed his satisfaction with Caledonia’s defense in what was a slower-scoring game than usual.

"I was proud of the guys because we had talked about – we hadn’t gotten off to very good starts lately," Brad noted.

"And uh, you know, the guys came out ready to play tonight. Our energy was great, we knocked out some shots, that always helps us get off to a good start. And then at times, you know, we – you know our guys, I think, felt that we may lack execution sometimes on defense. Maybe when they went on some of their – they went on a couple runs there. But we did a good job of getting a bucket here and there to make sure it wasn’t a big run, you know, like a 12-0 or something. So, very happy with the guys defensively tonight."

The Warriors advance to the semifinals to play Annandale Friday at 8 p.m. at Williams Arena.