Update: Winona mom still worried about son in Ukraine as he leaves behind wife, daughter

(ABC 6 News) – A Winona woman’s son is still stuck in Ukraine where cities and villages are being taken over by Russia.

The lack of communication Tina Hauser has with her son in Ukraine is what keeps her up at night. She wonders when he will be home and if he will be safe.

Hauser’s son, Tyler, is still over in Ukraine. He moved there in November to teach English and got married to his wife in January in Ukraine.

Hauser woke up to a call at 4:30 a.m. on Saturday with an update from Tyler.

"There was a bus leaving just for foreigners in the country. So, he had to get on that bus this morning," she said. 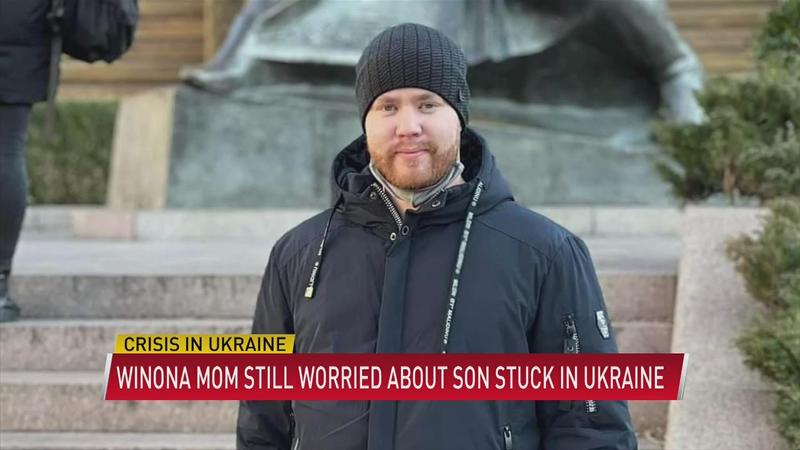 Hauser and her son try to text as much as they can, but they try to talk over the phone more often.

"We’ve tried to call just so we can hear each other’s voices but we have not been able to have very successful calls because of the internet," she said.

But the calls don’t last long.

"Maybe less than a minute. A minute maybe at the max," Hauser said. "I’ve been sitting with my phone in hand waiting for my phone to go off to get a message from him that he’s safe, that he’s okay and that they made it to that city. I haven’t gotten nothing."

Hauser said it’s just a matter of time. She is waiting to hear from him about what is next and if he is safe. She’s hoping that Tyler can get to Poland or another country that is safe.

"And it scares the living daylights out of me," she said about the whole situation.

One of the most painful parts is Tyler had to leave his wife and daughter behind in Ukraine.

"It scares me because he told me that his daughter just broke down and was struggling with him having to leave. I’m very fearful that they can’t get out but I’m hoping and praying that they do get to leave and come home to him," Hauser said. "We just gotta have faith and it’s running short."

She said Tyler is trying to stay hopeful, but he’s also very scared for his wife and daughter back in the Russia-invaded country.

"He told me last week that the Russians were going door to door to the houses and asking for food and vodka. He’s like people just don’t answer the doors, they do answer the doors and I don’t know what they give them mom, he goes, but it is very scary," Hauser said.

Tyler told her he wakes up to helicopters and tanks outside fighting. As of just a few days ago, they are no longer allowed to use social media in Ukraine and people there need to stop giving their location to others, even to worried family members back home.

"It’s very heart-wrenching because the support team that I have is wondering where is he at what’s going on and I can’t tell them. I have to protect my son even further yet and it’s been very hard. Very hard," Hauser said.

Hauser said she hopes this bus gets her son out of Ukraine, with Tyler’s wife and daughter soon to follow. They will return to Minnesota when they are able to.

If you would like to help Tyler and his family, a GoFundMe has been created.