(ABC 6 News) – The state’s Frontline Worker Bonus Program is entering into the next phase, as people are learning whether or not they will be receiving a bonus check.

According to the Minn. Dep. of Labor and Industry, more than 214,000 Minnesotans are expected to be denied, with many feeling the process was confusing and frustrating.

While most applicants are expecting to receive application status emails this week, some are still waiting.

"I think I would be more saddened and frustrated if either of us were going to be denied just because if you are going to put this out there and make it available, and people who should be eligible are getting denied, that would be very frustrating," said applicant Lauren Hughes.

Hughes and her husband both work at a grocery store in Rochester. They were two of many who worked on the front lines throughout the worst of the pandemic. 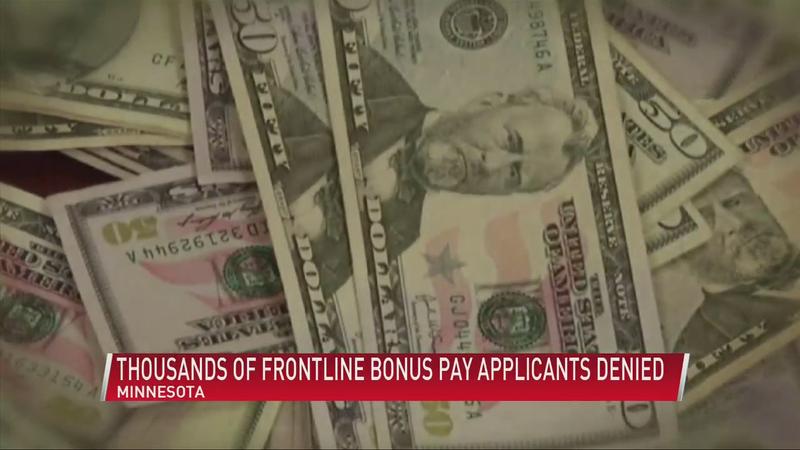 While Hughes understands the state is trying to do right by these workers, she says waiting for a final answer has been difficult.

"It’s been a little bit stressful not knowing for the last few months to find out if it’s denied on something that I would want to appeal and say, I just want to explain it to you," Hughes expressed.

While many people are still waiting to receive an email, others were denied, something they say is unfair.

"I’m not eligible for frontline worker and that is frustrating because I’m someone that had to work. I didn’t have an option, I had to pay our bills and I’m cut out of it," said Ali Johnson, whose application was denied.

Co-owner of a coffee and bakery shop, Johnson says as a small business owner, she does not have a W-2 form. Unfortunately, having that form is part of the bonus pay requirements.

With more than twice the amount of applications than expected, the total amount of money people are receiving is unknown as well.

"You know initially it was like ‘oh we get a $1000 or $1,500 and I thought that sounds pretty good. But, as it went down I thought, okay we’re not going to get that much. I guess the thought is there but does it really help people that needed the money? Probably not," said Brian Cooper, another applicant for the bonus pay.

According to the Minn. Dept. of Labor and Industry, there are 1.1 million active applications currently.

There are several reasons applications could be denied, including employment eligibility, income levels, or duplicate applications. The biggest reason, was the state not being able to verify people’s identities.

All applications that were denied were notified Tuesday.

If denied, people can appeal the decision. The appeal forms were attached to the denial emails and those forms need to be submitted by Aug. 31 by 5pm.