The American Experiment hosts ‘The Crime Crisis: Rochester’ after lawsuit

(ABC 6 News) – The Center of the American Experiment scheduled a law enforcement forum called "The Crime Crisis" for March 15, but the think tank filed a lawsuit against the Rochester Golf and Country Club for what it says is "a breach of contract."

According to the lawsuit, two days before the scheduled event, the Country Club told the center the event was canceled, saying it generated controversy among club members.

"The Crime Crisis: Rochester" was held Tuesday night at the Rochester International Event Center as a part of a series The Center of the American Experiment is conducting around the state.

Organizers of the event say the lawsuit actually benefited the event because the turnout tripled in size.

"That’s the silver lining in some respect because I think what we’ve seen is rallying into people saying ‘I’m not gonna put up with that. I’m going to this event.’ In some ways, I think we got some publicity out of it," Fran Bradley, chair of the Rochester Chapter of The American Experiment, said. 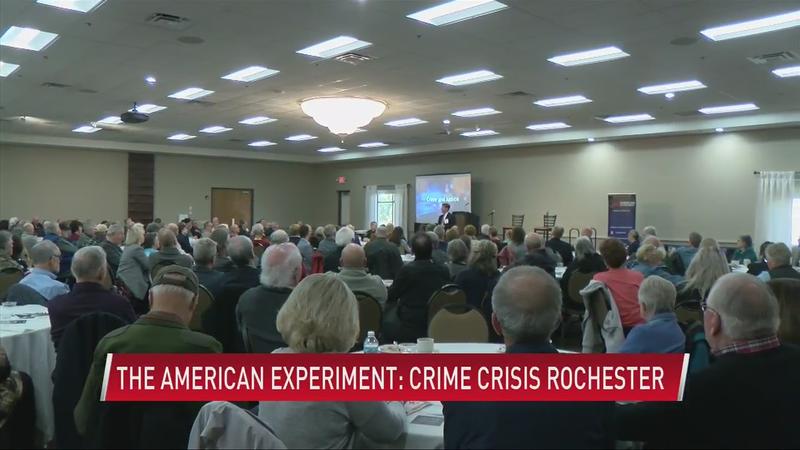 Nearly 200 people were in attendance Tuesday night to hear from Olmsted County Sheriff Kevin Torgerson and Rochester Police Chief Jim Franklin about how they can help combat the rising crime in Minnesota.

Franklin said we as a community can do better.

Franklin said there is not a more difficult job in the country right now than American policing.

"People don’t understand. They grab onto these national narratives of ‘defund the police, demilitarize the police, eliminate qualified immunity, eliminate police officer bill of rights.’ All of that stuff is ridiculous. It’s not going to make a difference," he said.

Franklin said what will make a difference is driving the police department through 21st Century Policing strategies which are best practices designed to help agencies reduce crime while building the public’s trust and protecting officers’ well-being.

Jeff Van Nest, a 20-year veteran of the FBI and keynote speaker at the event said that keeping the community safe starts at the local level.

"So we hope that folks will get a pretty thorough understanding that community safety is all of our responsibilities. So not only the police that protects us but also local government and community members," Van Nest said.

A big push Tuesday night was recruitment because there are currently more than 1,000 police job openings in the state.

Chief Franklin added that he’s looking to hire officers who have lived experiences that can be more empathetic officers.

As far as the lawsuit goes, they are expected to be in court Wednesday morning.