(ABC 6 News) – For thirty years now people in Dodge County have been coming together to raise money to show support and help fight cancer. Organizers say this year’s Relay for Life is especially important because donations last year were down and the need is as great as ever. The Relay for Life was an emotional but fun event for those affected by cancer. Cancer survivors, friends and families to come together in support and celebration, and to also remember those we’ve lost to the disease, and to raise money for the American Cancer Society, for cancer research and to help families who can’t afford cancer treatments.

The night kicked off with speakers, and a survivors lap around the track. That track lined with luminaries standing as lasting memories of loved ones who are battling cancer, who have defeated cancer and those who have past from cancer.

Dodge County Relay for Life chair and cancer survivor Lisa Rollins said, "To see the people come out and actually share their memories tonight and that’s just. The memories of family members they either may have lost or who are still here fighting it that’s just so cool to me that they can do that."

Each year, the relay designates an honorary care giver. This year Grant Klennert received that honor. Many in the community know him as the principal at Hayfield, but in 2018 he also was the primary caretaker of his family while his wife went through treatment.

"They just asked me to come and share our story about being a caregiver with three young kids and a wife who was going through cancer treatment," said Grant. 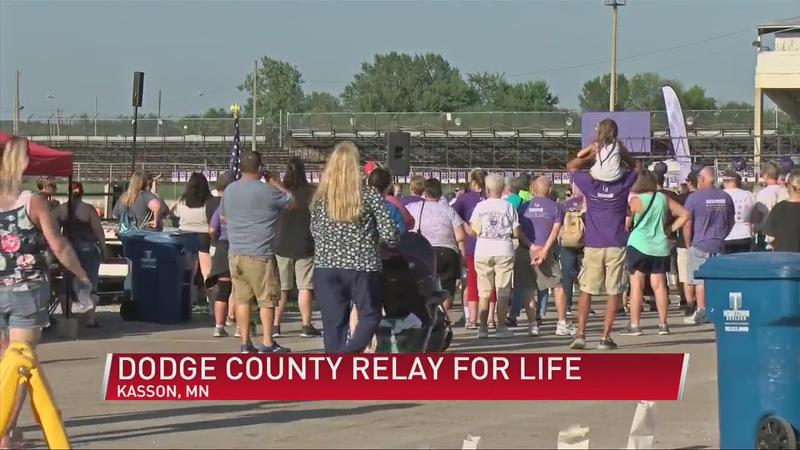 During that time Klennert worked day and night for his family. His wife Michele saying she couldn’t be more thankful.

"He did double time. He would be up and out of the house to hospital by 7 a.m. for round with the doctors so he could meet with them and then he would leave by three o’clock in order to get home to get the kids from school and day care and then pull dad duty at night," added Michele.

Senator Carla Nelson is regular participant in the relay, but this year was as little different for her. It’s her first time participating as a survivor. Senator Nelson said, "It was very emotional to take that survivors lap. Certainly I’ve been to many relay for life before, but never as a survivor." Senator Nelson was diagnosed with breast cancer in December 2021 and received her treatment at Mayo Clinic in Rochester. She urges all women to go get early screening for breast cancer and is working on legislation to get more affordable access to the screenings and treatment.

There are hundreds of people that turned out to the event Friday and for almost everyone there, they’ve been impacted by cancer in some way.