(ABC 6 News) – Millions of birds across Minnesota have contracted or died from bird flu this year. There are six geese mysteriously dead at Silver Lake Park in Rochester, and Rochester city officials and the Minnesota Department of Natural resources think bird flu may be the culprit.

Many who frequent Silver Lake Park enjoy watching the geese and goslings.

"We adore the Canada geese. I was a child in Rochester and I always enjoyed feeding the geese down here," said Jessica Braga, a nearby resident.

A passerby found the dead geese Sunday night while on a walk.

"We normally don’t find that many die off at once," said Rochester Parks and Recreation Director Paul Widman. 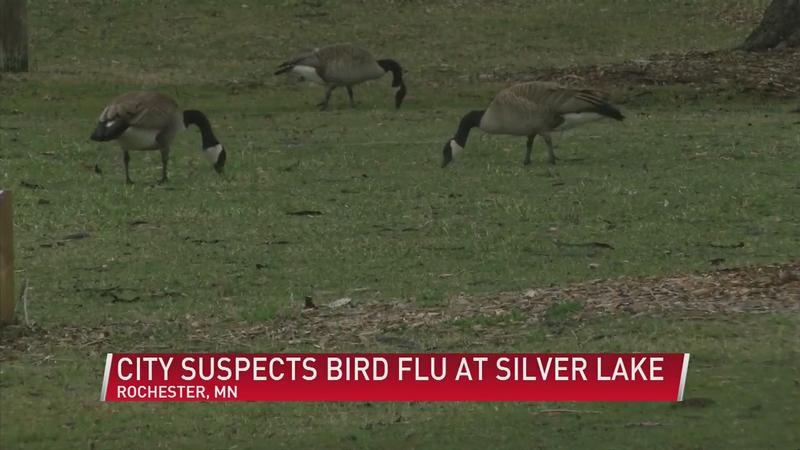 The passerby reported the geese to the Minnesota Department of Natural Resources, since then the DNR and Rochester Parks and Recreation have been working together with local public health officials. Test results from the dead birds haven’t come back yet. but the city wants people to know it is a possibilty and ask everyone to be cautious.

According to the CDC It is rare for humans to contract bird flu, however the organizartion announced yesterday a man from Colorado tested positive for the virus. This is the first time a human has been infected with this strain of bird flu in the United States.

But that is one person out of millions of birds. The CDC still classifies bird flu as low risk to humans.

"We should all put things into perspective. It’s not something that humans living in residential areas without urban chickens really need to worry about at this point," Braga said.

For now, Rochester Parks and Rec will continue to monitor the remaining birds and asks everyone stay far away from the water fowl.

"The parks will remain open, we just want people to be very careful around geese," Widman said.

Those that can’t avoid wild birds or poultry: wear gloves and wash your hands after interacting with the birds. Rochester Parks and Rec said they should get test results back from the dead birds next week. Governor Walz today extended his efforts to stop the spread of bird flu for another 30 days.