(ABC 6 News) – Sunday was the first Rein in Sarcoma Ninja Anywhere Fundraiser in Rochester. Held at Little Thistle Brewing Company, it’s an event to raise funds to fight back against sarcoma, a rare cancer that develops in the bones and soft tissues.

"You got to be hopeful and you know, it’s a dire diagnosis, and people die. We hear about, you know, all the time," said Mike Schurhamer, a sarcoma survivor and volunteer with Rein in Sarcoma.

In 2006, Schurhamer was diagnosed with sarcoma in his leg. He began treatment at the University of Minnesota and after seven years, a scan found sarcoma developing in his lungs. Fast forward and after surgery, he’s now doing well.

Schurhamer wasn’t the only survivor there. Kara Dolney almost lost her hand to the disease. Now, there’s a special tattoo on that hand, her doctor’s name.

"They were the ones that helped save my hand," said Dolney. "He has been just so influential in this whole journey and one of my biggest supporters." 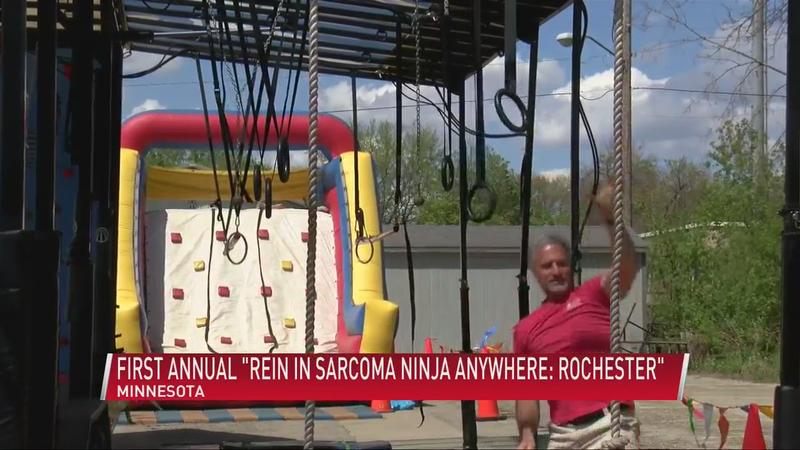 People from across the state came to compete on the Ninja Anywhere obstacle course. While it was a day to have fun and be active, every climb has a special meaning. Especially for Janelle Calhoun, the executive director of Rein in Sarcoma who lost a friend to the disease 22 years ago.

Since 2001, Rein in Sarcoma has donated more than $2 million to research at Mayo Clinic and the University of Minnesota. The two now work closely together to treat sarcoma patients.

"I’m encouraged by the progress that comes out of the research," shared Schurhamer.

All proceeds from Sunday’s event will go right back to Rein in Sarcoma. That money will then be given to Mayo Clinic to help further sarcoma research.