(ABC 6 News) – A 39-year-old Lake City man was arrested in connection to a stand-off with police at the Extended Stay in Rochester Monday, according to the Rochester Police Department.

Rochester Police responded to the Extended Stay just before 3 p.m. Monday for calls of a female in a hotel room in distress.

The hotel manager told police he heard her screaming and saying "Stop" and "Get off me." Someone in the hotel told police they heard her say "Don’t point the gun right at my face."

Officers tried to make contact via telephone and through the door of the room. Negotiators also tried speaking with Titus. According to the police, he was uncooperative. 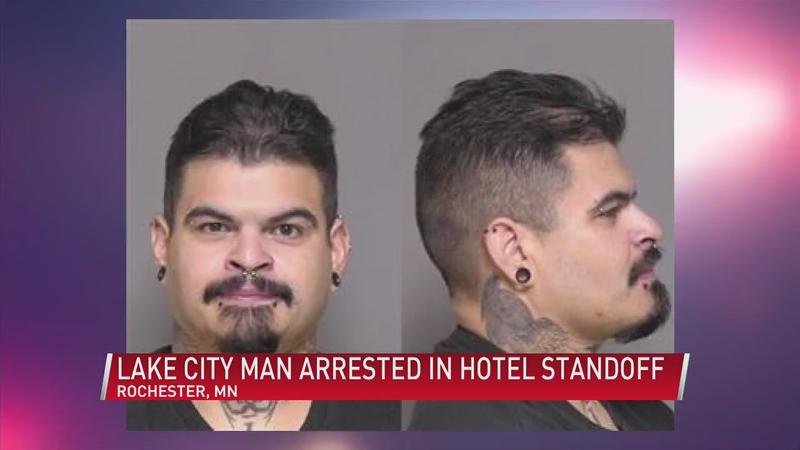 Titus had locked himself and the woman in the room.

Police eventually forced the door open and called the two out of the room. Titus exited and was arrested without incident around 8 p.m., according to RPD.

Officers did find a handgun inside the room.

Police said Titus has a criminal history throughout southern Minnesota.

The woman is 35-years-old, she did have injuries from the assault and is the suspect’s ex-girlfriend.

This investigation is ongoing.

Shortly before 3pm, Rochester Police Department responded to a report of an agitated man, possibly armed, with a woman inside a second floor room.

The Crisis Negotiation Unit and the Community Outreach Specialist Team attempted negotiations. At approximately 8pm, members of the Emergency Response Unit entered the room and safely detained the man without force.The woman in the room with him was unharmed.

The investigation into this incident is ongoing.
—

(ABC 6 News) – There is a heavy police presence including SWAT vehicles at the Extended Stay America hotel in southeast Rochester.

Rochester Police Department is responding to a domestic incident involving a person in crisis who is potentially armed at the Extended Stay America on Wood Lake Drive SE.

"RPD is still diligently working to peacefully resolve the situation involving a man in crisis inside the room with a known female. RPD’s crisis negotiation team is on-site attempting to make contact with the individual. OCSO is also on-site offering assistance."

Police are urging the public to stay away, as it is an active scene.

This is a developing story. ABC 6 has a crew on scene and will provide updates as new information becomes available.