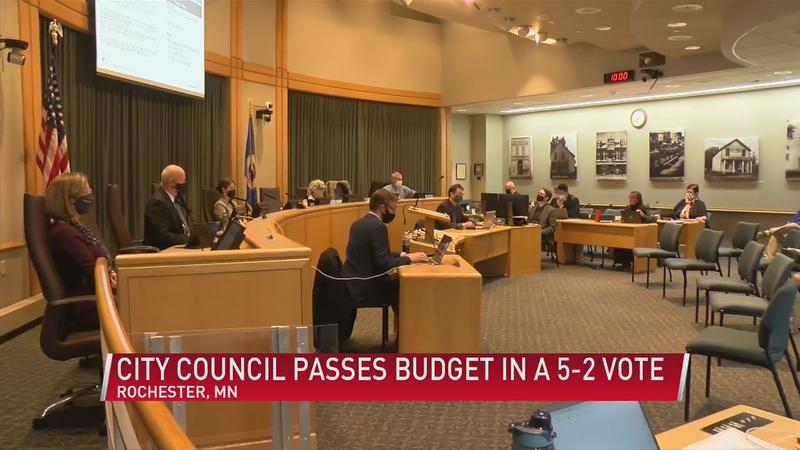 Included in that is the 6.5% tax levy. Council members Molly Dennis and Shaun Palmer were the ones that voted no.

"We’re gaining more homes which of course will have us gain more property tax, but to put it on the backs of people who are struggling paycheck to paycheck. In an uncertain time, I don’t think it’s fair," Councilmember Molly Dennis said.

The Rochester City Council has been working on this budget for the past 6 to 9 months. Monday evening, the day of the vote.

But for some council members like Molly Dennis, urged the council to rethink the tax levy increase for another week. She approves of the budget, just not the tax levy.

"I feel like one more week can make a difference," Councilmember Dennis said.

But not everyone on the council agrees.

"The times of the platitudes of just showing up and saying we don’t like the amount that actually doesn’t change the budget. None of us like the amount, we all wish it was zero. But just to sit back and say I don’t like it. The time for that has gone," Councilmember Nick Campion said.

Council Member Kelly Kirkpatrick voted to pass the budget. But for her, it was a tough choice.

"I want to say no, but it’s hard. I think we just need to dig a little bit deeper and see what it is that we could do," Councilmember Kirkpatrick said.

That motion proposed by Councilmember Dennis to vote on the budget next week was shot down.

"I’m empathetic for what’s happening with this. But again, when I’m looking at how we’re operating over the last two years and how we pay for that. I’m going to support the levy," Councilmember Patrick Keane said.

Council President Brooke Carlson voted yes. Her reason was where the money is going from the tax levy.

Of the $101.2 million general fund expenses, 58.1% funds the public safety services, which includes police and fire. The total for 2020 property tax, both residential and commercial is $86.8 million. Of that, 68% supports the general fund, while 10.5% supports Parks & Recreation and 8.5% supports the Rochester Public Library. Of the total budget, the largest expenditure is the Capital Improvement Plan, with a total of $148.5 million.

"There’s a bunch of tradeoffs here that we’re going to have to live with and think about longer-term strategies for how we’re going to contain this tax levy and not think of it as it’s skyrocketing, but just as a balanced, steady approach," Carlson said.

So as city leaders make this call, some believe more work could have been done.

"I don’t like the idea of where we’re going with this," Councilmember Kirkpatrick said.

Last year there was no tax levy increase due to the pandemic. City leaders say your property taxes all depend on your property value.

The most notable Capital Improvement Plan projects include:

In the coming weeks, the adopted budget documents will be available via the City website. With the new two-year budget process, the 2023 budget will come from the foundation provided as a part of the 2022 budget process.