(ABC 6 News) – As the world watches the pictures and videos coming out of Ukraine of crowded train stations and families being torn apart as thousands flee the country amid Russian attacks, a local mother just wants to know her son is safe.

Tina Hauser, of Winona, says she’s praying that she will be reunited with her son again, soon.

“I fear for the fact that I may not have a son. He is a U.S. citizen in a foreign country where they can do more harm. I fear that every day, every moment that I live,” she said.

Her son Tyler is in a small village outside of Kherson on the southern border, just north of Crimea. Last summer Tyler met a woman online, he visited her in November and the couple got married. He started a new job teaching English at a local school there.

Hauser says it was a new life for her son, but that happiness quickly turned into fear as tensions escalated with Russia. “He’s trying to stay strong and not let Mom worry, but I can see it in his face, I hear it in his voice, I read it in his text. He’s afraid. He’s not sleeping much, and I can see that. I know that he’s exhausted from all of the stress of worrying about his life and their lives,” Tina said. 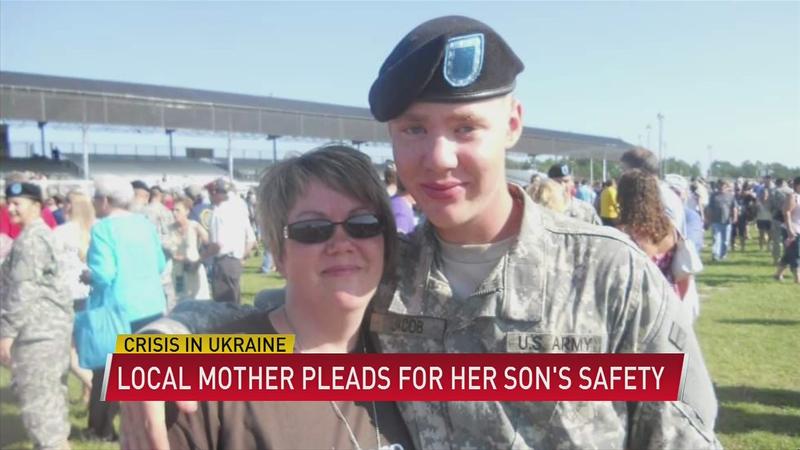 After leaving their home last week, Tina says Tyler, his wife and step-daughter fled to his in-laws in the country. Tina said they have been ordered by military soldiers to stay indoors. “He sent me a message on Saturday that their house was marked with an X. They have been advised ‘don’t go outside, don’t confront the military, don’t do anything.’ He’s got that survival mode from being in the military and he knows what to do and how to protect. I knew as soon as he stepped foot on that soil in Ukraine, that was going to be his country.”

Now, Tina says her 28-year-old son and his family are attempting to make it to Poland, and to come home to the United States.

“I wish he can see me being strong for him because he feeds off of my strength, just like I feed off of his. I just want him to know that I’m so proud of him. He’s been the best son that I could ever ask for, I just love him so much,” said Tina.

Until that happens, every day Tina says she’ll cling to her phone and to hope.