(ABC 6 NEWS) – Our area law enforcement helps people every day. But sometimes, there are unexpected moments that take them by surprise.

This is one of them.

Olmsted County Sheriff’s Office Deputy Nate Jacobson started his day like any other day, little did he know, he would help out a furry friend!"

"I just pulled up to him and I couldn’t believe it was a baby skunk, you could hear my excitement during the video," Jacobson said. 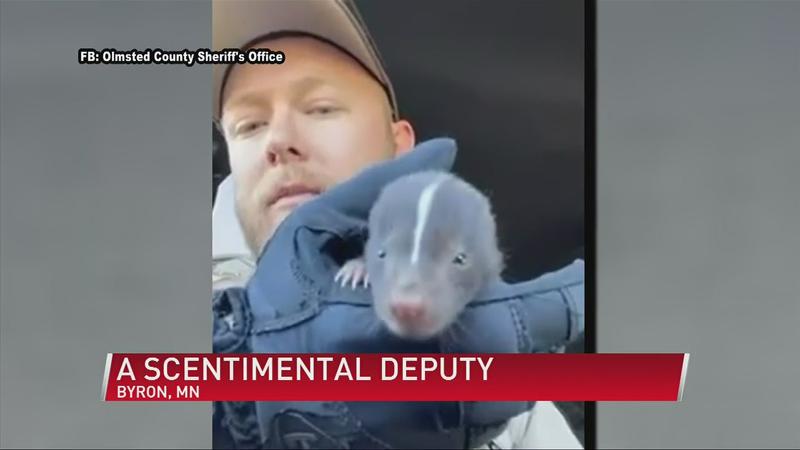 When Deputy Jacobson saw the baby skunk in Byron, he was left scratching his head.

"I freaked out for a minute, I didn’t know what to do, so I put him in some grass, and shade to see if he’s doing his own thing," Jacobson said.

But that didn’t work, Deputy Jacobson waited to see if the little guys mom would come back to him, but no mom in sight. So he took matters into his own hands, and his dad instincts kicked in!

So he hit the road- back to the Med City- and got the help he needed.

"Have You Guys Taken a Skunk in before?" No!"

Even the staff was at a loss for words about how cute the little guy is!

But there Deputy Jacobson was — holding his new friend — giving him the milk he needed.

"What was going through your head when you were helping out the little guy?"

"As you can see in the video he was really thirsty — it was just kind of that full-circle moment," Jacobson said.

And when the internet got wind of this – they fell in love.

"A lot of people have come up with Mr. Le Pew, I like that! It’s pretty funny," Jacobson said.

Mr. Le Pew is off to the Wildlife Rehabilitation Center of Minnesota — so even though Deputy Jacobson and his new friend parted ways — we can all learn something from this story.

So as Deputy Jacobson drives off, he will continue to answer calls for not only the human members of his community– but for the furry ones too.