"I would never have seen this space in a million years and thought this could be six units of housing. But the work that they’ve done is just tremendous," said Dave Dunn, the director of the Housing and Redevelopment Authority with Olmsted County.

Once an old garage, the building, at 1765 Restoration Rd SW, is about to be so much more.

"What this will mean to veterans from all over Southeastern Minnesota is that they now have hope," said Kati Carpenter, DAV Chapter 28 Commander.

Bear Creek Development Center is building six units of housing set aside specifically for low income veterans. They would like to keep rent at $650 a month with utilities and internet included. 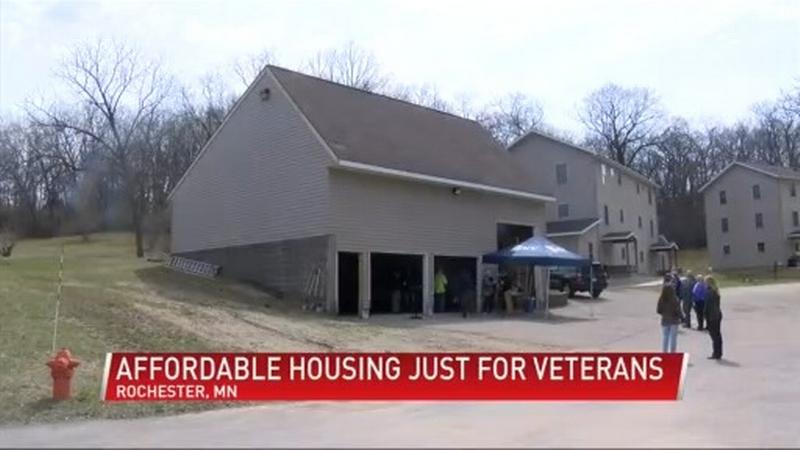 "Fundraising efforts will really help keep those rents down and affordable for our community," said Jeff Urban with Bear Creek Development.

The project costs $450,000 overall with $200,000 of that money coming from fundraising in the community. Bear Creek is about $47,000 shy of making that goal. They hope to have the project completed by the end of the year.

About 5.3 percent of Olmsted County are veterans, according to the latest data from the Minnesota Department of Veterans Affairs.

"We see veterans who are losing their homes currently," Carpenter said.
Veterans may face a wide variety of mental health problems after returning home which can make it harder to find a home or a job. The Department of Veterans Affairs says that about 100 Minnesota veterans per-year commit suicide. Bear Creek, the city and the county want to offer hope through supportive housing.

"For me and other veterans it’s the camaraderie aspect of it. I think it’s great that they’re going to be living close to each other. They can help each other out," Carpenter said.