(ABC6 News) — A stolen U-Haul truck evaded law enforcement from Michigan to Minnesota, ending in a chase down I-90 Wednesday.

The Winona County Sheriff’s Office received a call from Lacrosse County authorities at about 10:20 a.m. Wednesday, concerning a U-Haul truck traveling westbound on I-90 and approaching the Winona County line.

The pursuit began in Vernon County, WI, where authorities had located the truck following a gas drive-off complaint from Richland County. The driver refused to stop for Vernon County authorities, then traveled into Lacrosse County, where attempts to use spike strips to stop the vehicle were unsuccessful.

During the pursuit,officers discovered that the U-Haul truck had been stolen out of Battle Creek, Michigan, according to the Winona County Sheriff’s Department.

Winona County offivers located the U-Haul truck on I-90 near Nodine, and pursued it westward. They attempted to use spike strips to stop the truck several times. Eventually, the law enforcement used spike strips and "a low-speed contact maneuver" to stop the vehicle on Olmsted County Road 10. 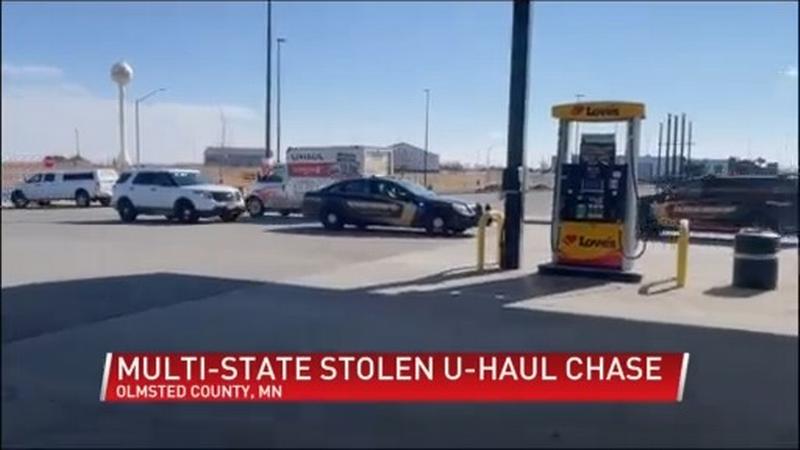 Demandre Tyshann Andrew Frazier, a 26-year-old from Las Vegas, was taken into custody and transported to the Winona County Jail. He was the sole occupant of the vehicle.

Frazier is facing potential charges of fleeing a peace officer in a motor vehicle, theft of a motor vehicle, reckless driving and giving false name and DOB to an officer, according to the Winona County Sheriff’s Department.

No officers or members of the public were injured during the incident.